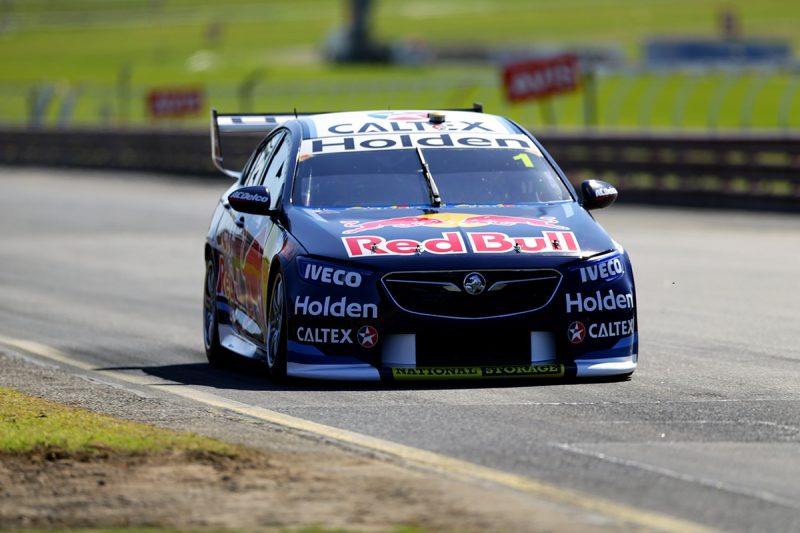 Jamie Whincup has kept his Red Bull Holden on top of the timesheets as Chaz Mostert found the fence in Practice 2 at the Rabble.Club Sandown 500.

Whincup ended the session with the only ‘seven’, a 1:07.9688s during his final run in the #1 Red Bull HRT ZB Commodore, which left him a tenth of a second clear of team-mate Shane van Gisbergen (#97 ZB Commodore) in second and James Courtney (#25 Boost Mobile ZB Commodore) in third.

Whincup spent the entirety of the 30-minute session on top, dropping to the low-eights before his final effort moved him to a lap just over a tenth slower than his co-driver Paul Dumbrell’s Practice 1 benchmark (1:07.8467s).

The 2017 champion was left somewhat frustrated by a late patch-up job on the track surface despite setting the fastest lap.

“There’s no issues, but it’s sort of frustrating that they decided to fill the gaps in the track the day before the biggest weekend of the year here,” said Whincup.

“Do it two or three days or a week and we don’t have an issue with rubber and grip. But it’s the same for everyone, we tune to the conditions.”

Van Gisbergen was similarly prominent throughout before moving back up to second position in the final minute and dislodging Courtney by just 0.0034s.

Garth Tander shot up from 20th to fourth after the chequered flag in the #33 Wilson Security ZB Commodore, ahead of the third Triple Eight entry of Craig Lowndes (#888 Autobarn ZB Commodore).

Waters also came from deep in the field in the final minutes to ultimately be classified in sixth, from Andre Heimgartner (#7 ACE Nissan Altima) and Fabian Coulthard (#12 Shell V-Power FGX Falcon).

Mostert was third-fastest when he caused significant damage to the rear of his #55 Supercheap Auto FGX Falcon at Turn 4.

The Tickford driver tripped up on the Turn 3 exit kerb and slid backwards into the fence, which is at least protected by a three-layer tyre bundle, at Turn 4.

“Just pretty filthy off line there for some weird reason,” said Mostert.

“The grip is up a bit this year with the sealant around. (I) Just got a bit wide on that kerb. We used it all last year in the race, but today it’s very dirty off line.

“The car slid out from underneath me, couldn’t get my hands quick enough and just went straight back into the wall.

“(It) Didn’t feel too bad, but in saying that not the session we wanted. I think the same ingredients still work around here but we’ve just got to play it by ear and see how (co-driver James Moffat’s) session goes this afternoon.”

It brought an early end to Mostert’s session and he was shuffled back to ninth, while Scott Pye (#2 Walkinshaw Andretti United ZB Commodore) rounded out the top 10.

Scott McLaughlin was one position further back in the #17 DJR Team Penske FGX Falcon.

Richie Stanaway had a number of moments on his way to 24th-fastest in the #56 Rabble.Club FGX Falcon.

The New Zealander had an early spin at Turn 4 but, unlike his team-mate Mostert, kept his car off the fence.

He pinched the left-front and ran well wide at the same spot shortly after before running through the Turn 11/Turn 12 gravel trap right near the end.

While the session was open to all drivers, only the primary drivers participated.

Practice 3, another 30-minute session for co-drivers only, will start this afternoon at 1535 local time/AEST.