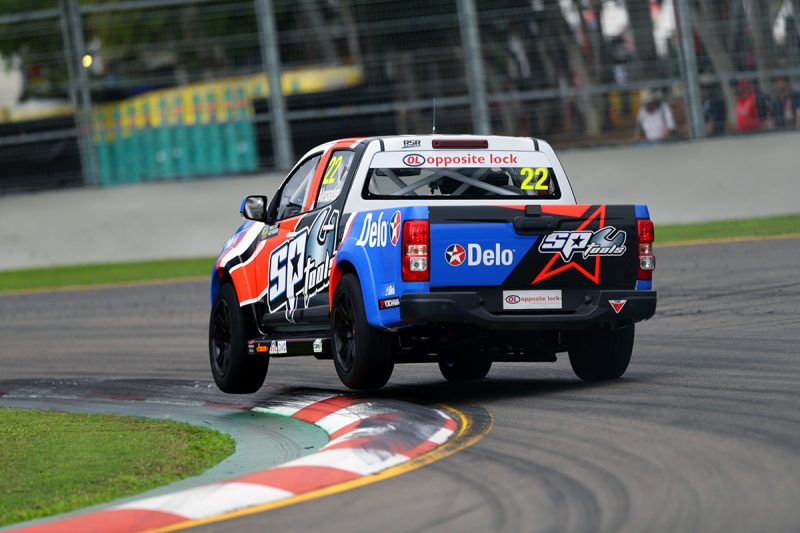 The ECB SuperUtes fleet will race with an upgraded rear end this weekend as well as wheel teethers on all corners of the cars.

The series’ last round at Queensland Raceway saw a wheel shot over a line of trees beyond the circuit’s outfield and into a dam after Mick Sieders’ big rollover at the start of Race 3.

That incident came just a race after Matt MacKelden’s Toyota Hilux threw a wheel off, which bobbled through a gravel trap before coming to rest against a tyre wall, after side-so-side contact with Steve Wilson.

The incidents prompted an investigation at Supercars which has resulted Pace Innovations delivering upgrades to the rear axle assembly which it supplies to all cars in the series.

Not only has the axle been strengthened, wheel tethers, which became mandatory in the Virgin Australia Supercars Championship at Sandown three years ago, have been installed as an additional safety measure.

“The rear axle has been strengthened plus we’ve put wheel tethers on both the front and rear of the cars, no different to the Supercar.

“That should greatly reduce the possibility of a situation where a wheel coming loose could happen.

“But because it has happened, we’ve gone the extra step of putting wheel tethers in.

“It’s something that we have on our other Supercar categories, it’s something we’re used to working with, so we’ve added them in as well, and that’s on both the front and rear wheels of all the SuperUtes.”

The changes resulted in teams sending their components back to Pace’s Queensland facility between the Ipswich and Sandown rounds, although the axle is not a brand-new specification per se.

“The teams sent their rear ends back to Pace and they’ve then applied the modifications to bring them all up to a slightly stronger spec,” Sakzewski confirmed.

“They were very strong to begin with, there’s no doubt about that, but having seen a couple of incidents where we have managed to break them, a decision was made that we do need to strengthen it.

“(It’s) not so much a new spec of axle, just stronger welds and more securely attached.”

A field of 11 SuperUtes will again take to the track on the Rabble.Club Sandown 500 support bill.

Sieders Racing Team has commissioned a new Mitsubishi Triton to stand in while that which Mick Sieders rolled at Queensland Raceway undergoes a long repair.

Elliot Barbour, who debuted two rounds ago at Townsville, returns for a second start in the team’s other Triton.

The rest of the field is unchanged, although Aaron Cameron’s Mazda BT-50 has been stripped over the break by Peters Motorsport after he too rolled in Ipswich having slipped on his own fluid leak in practice.

A second Ford Ranger and a fourth Toyota Hilux in the hands of Aussie Racing Cars driver Charlotte Poynting are set to join the field at Bathurst.