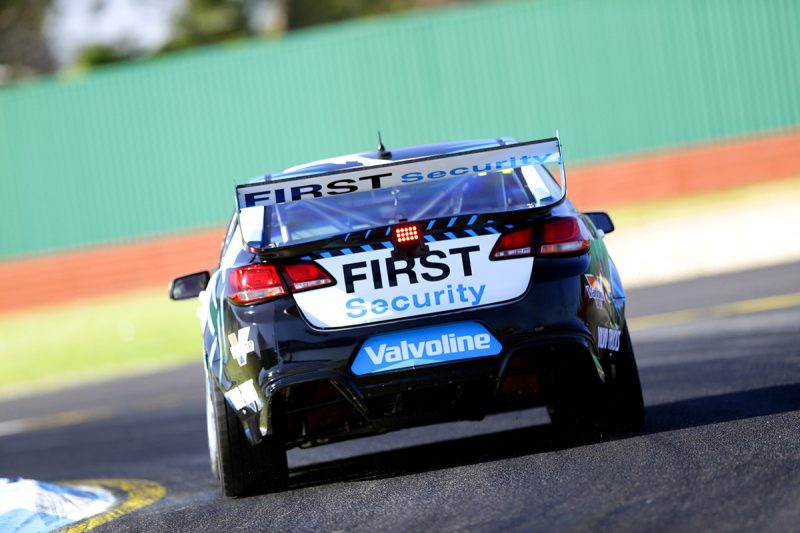 Chris Pither has gone from the bottom of the timesheets in Practice 1 to the top in Practice 2 for Round 5 of the Dunlop Super2 Series at Sandown.

The New Zealander had backed his #44 Garry Rogers Motorsport VF Commodore into the fence during the morning’s 40-minute session and failed to set a representative time.

In the afternoon, however, he further lowered the second-tier Supercars series’ practice record to a 1:08.8717s on a weekend when the field runs on the softer compound tyre for the first time in five years.

Paul Dumbrell, who set the pace in Practice 1 in both Super2 and the Virgin Australia Supercars Championship, was the only other driver into the 1:08s bracket with a personal best 0.0831s slower than Pither’s.

Dumbrell’s fastest lap, like Pither’s, came on his final full lap of the session despite the #88 Eggleston Motorsport VF Commodore wearing a scrape on its right-front corner from an incident which went unseen by television cameras.

Macauley Jones was even closer to Dumbrell than Dumbrell to Pither as he ended the session and the day in third position in his #14 Brad Jones Racing VF Commodore.

Garry Jacobson, second to Jones ahead of the final runs, was shuffled back to fourth in the #26 MW Motorsport Nissan Altima.

Brodie Kostecki finished the session in fifth position despite missing more than 10 minutes at the end when he parked the #57 Kostecki Brothers Racing VF Commodore due to a fuel pressure issue.

The second-year Super2 driver was also the first of those who are not on double duty in the Rabble.Club Sandown 500 this weekend.

Alex Rullo (#62 MW Motorsport Nissan Altima) was on the pace early on but his second flyer was ultimately his fastest and he gradually fell to seventh.

Unlike the morning session, Practice 2 ran without interruption.

Mason Barbera, however, made his contribution to the highlights reel by twice picking the left-hand-side of his #99 Garry Rogers Motorsport VF Commodore high off the ground when he grabbed the kerb through Turn 1.

He was classified 19th for the session, still within a second of first position, and one position ahead of Matt Stone Racing’s enduro co-driver Bryce Fullwood (#16 Matt Stone Racing VF Commodore).

The Super2 field returns to the track tomorrow morning for Armor All Qualifying for Race 1 of the weekend at 1110 local time/AEST.