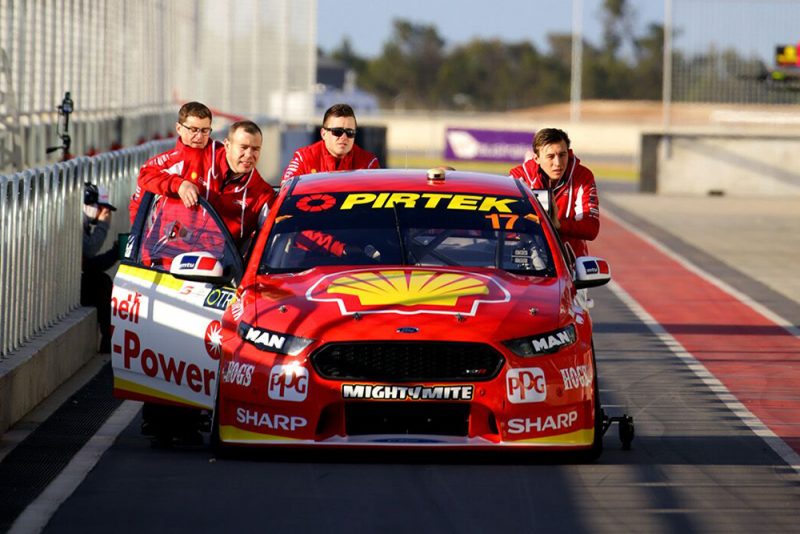 Shell V-Power Racing is awaiting its fate from a stewards hearing following a technical rule breach by Scott McLaughlin’s car at the OTR SuperSprint.

Supercars officials will review the matter tonight at Sandown after it was revealed that car #17 mistakenly ran with an incorrect drop gear during Sunday’s qualifying session at The Bend Motorsport Park.

The team realised its error following the qualifying session and fitted the correct ratio for the race although rival teams are upset that the matter was not picked up and penalised.

The entire field is required to run a uniform drop gear ratio stipulated by Supercars which varies from circuit to circuit.

The series told Speedcafe.com that the car gained no advantage in the session where it breached sporting rules.

Speedcafe.com understands that a range of penalties from a fine to the deduction of team points could be issued following tonight’s hearing.

“The Supercars Technical Department found an alleged breach of Rule C10.4 following the OTR SuperSprint at Tailem Bend, which was not detected during the spot check scrutineering process,” read a statement from Supercars.

“The alleged breach was discovered post-race during a routine review of ECU data taken from all cars, which is analysed at and after every race meeting.

“The Supercars Sporting and Technical Director contacted the Authorised Representative of DJRTP to discuss the alleged breach. The Team advised it had changed the transaxle in Car 17 the previous evening and the replacement transaxle had an incorrect drop gear ratio. The Team then changed the drop gear to the correct ratio post Qualifying.

“It should be noted at no point during the Qualifying session or during post Qualifying Parc Ferme did any Team allege a breach or protest the results of Qualifying.

“As is standard procedure for technical matters and alleged breaches found away from a race meeting, any such matter is referred to the Stewards the next time they convene, which in this case is the Sandown 500 in Melbourne.”

DJR Team Penske managing director Ryan Story has reiterated that McLaughlin gained no advantage from running the gear ratio and that human error was to blame for the mistake.

“It was a genuine mistake the wrong gearbox was in the wrong travel case. All the paperwork didn’t line up and its gone in the car. As soon as we were made aware of it we fixed it. There was no advantage,” Story told Speedcafe.com.

“We will wait and see what Supercars determine to do and we will take it from there.

“They have had the ability to ascertain and see what has occurred from the data. That is where the process is at now.

“This isn’t the first time that a team has made a mistake. It is human error and we are embarrassed by it of course and it does happen from time to time.

“I think where we need to see some more vigour applied from time to time in the enforcement and the policing of some of the rules. It is quite clear that in this instance that no advantage was gained.”