The final retro livery for this weekend’s Rabble.Club Sandown 500 has now been released and Speedcafe.com wants to know which is your favourite.

With arguably the best ensemble of historical looks recreated in the short history of the concept, read through the summary below and let us know your answer in this special edition Pirtek Poll. 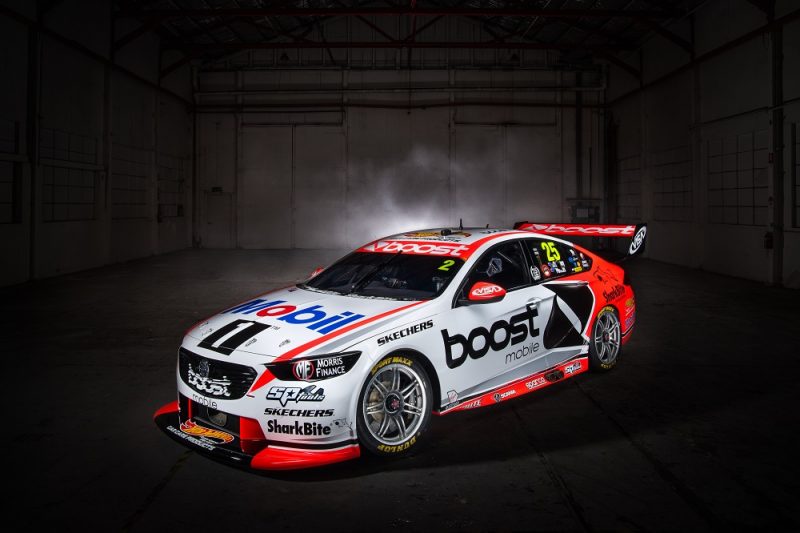 Walkinshaw Andretti United has reskinned its ZB Commodores in a nod to the team’s win in the 2008 500-kilometre enduro, held that year at Phillip Island.

Garth Tander took the lead with just over 10 laps remaining and went on to win the race for he and Mark Skaife in the latter’s final full-time V8 Supercars campaign.

Tander also qualified the #1 Holden Racing Team VE Commodore on pole for the Supercheap Auto Bathurst 1000 four weeks later, but stalled when the lights went out due to a clutch problem. 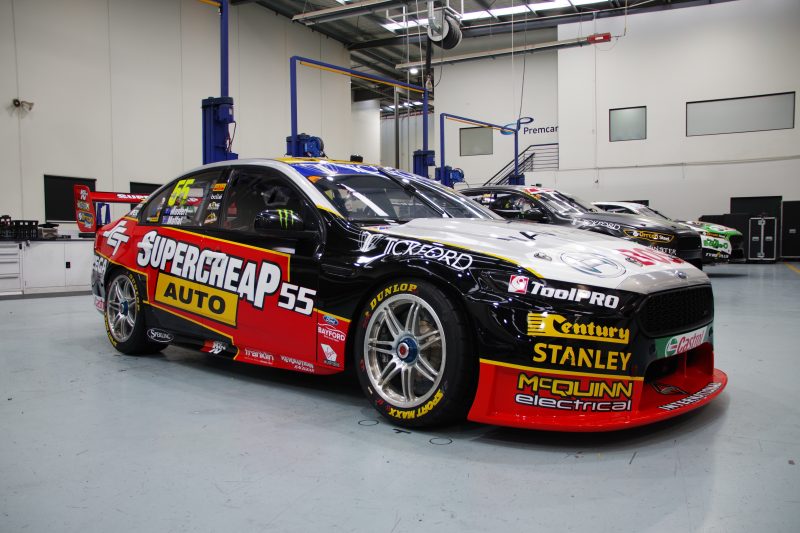 The 2018 version harks back to 2004, the first year of the automotive retailer’s now customary red, yellow, and black schemes. 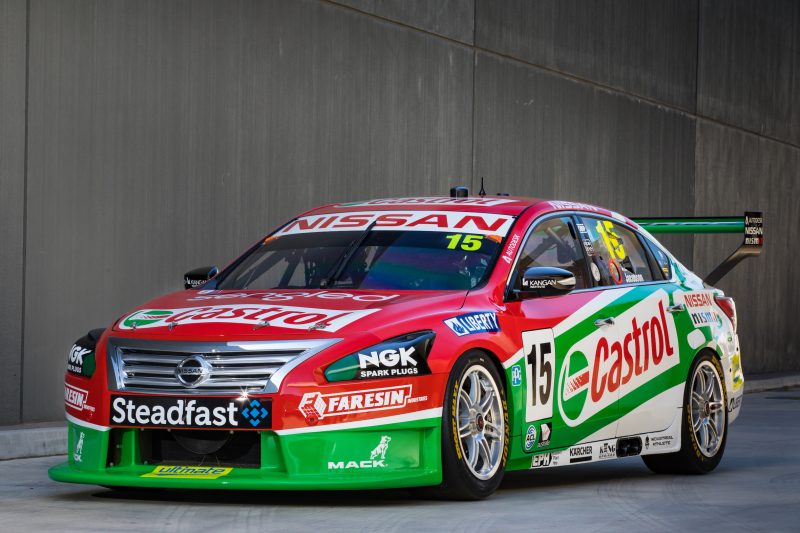 Nissan Motorsport’s retro livery for the #15 Castrol Altima not only dates back to one of the oil giant’s old cars, it is also fitting given that the team was in part born out of the Perkins Engineering squad which raced with that look.

The specific version that Rick Kelly and Garry Jacobson will drive this weekend comes from 2002, when Russell Ingall and Steve Richards finished both enduros in second position in the #8 VX Commodore, while Larry Perkins and Paul Dumbrell were fifth at Bathurst in the #11 VX. 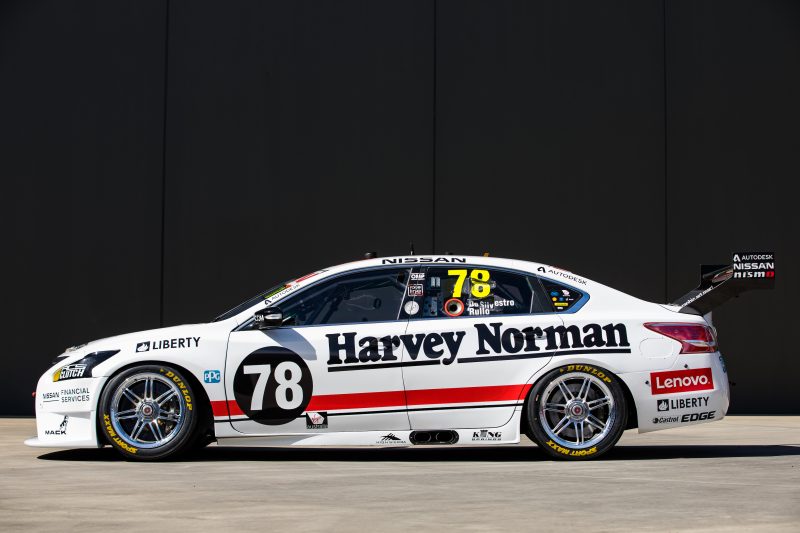 It features the Swiss racer’s trademark #78 in the circle style of the day, with a predominant white base. 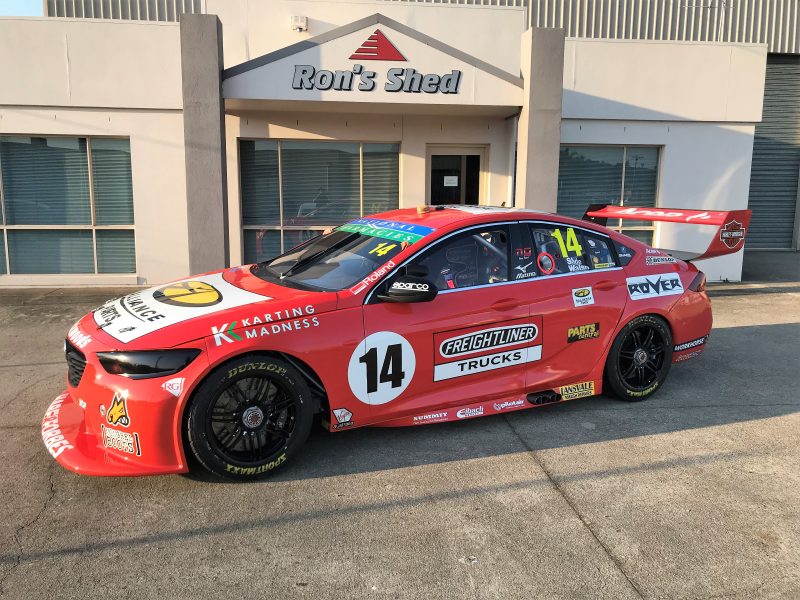 A year on from its trio of Norm Beechey liveries, Brad Jones Racing has similarly doffed its hat to Bob Jane with a recreation of the look of his 1970s Holden GTS350 HQ Monaro sports sedan on the #14 Tim Slade/Ash Walsh entry.

The livery is personally significant for team co-owner Kim Jones in particularly, who worked for Jane on the Monaro, while both he and Brad Jones are godsons of Jane. 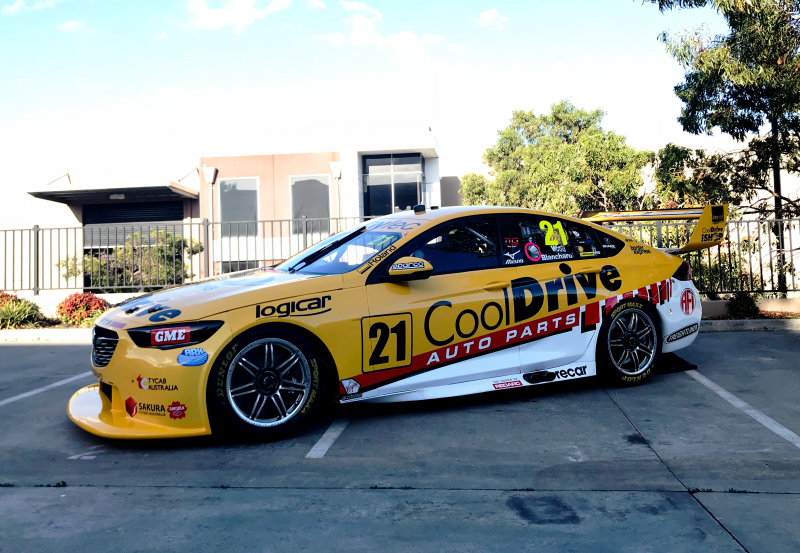 Tim Blanchard’s retro livery keeps it in the family by replicating the look of father John’s two-litre BMW M3 from the 1993 season.

Blanchard the senior raced at Logamo Racing Team, formed by Tony Longhurst, the late Frank Gardner and Terry Morris. The latter’s name was also emblazoned in a cryptic form on Tim Blanchard’s Super2 car when he was sponsored by Sirromet in 2010. 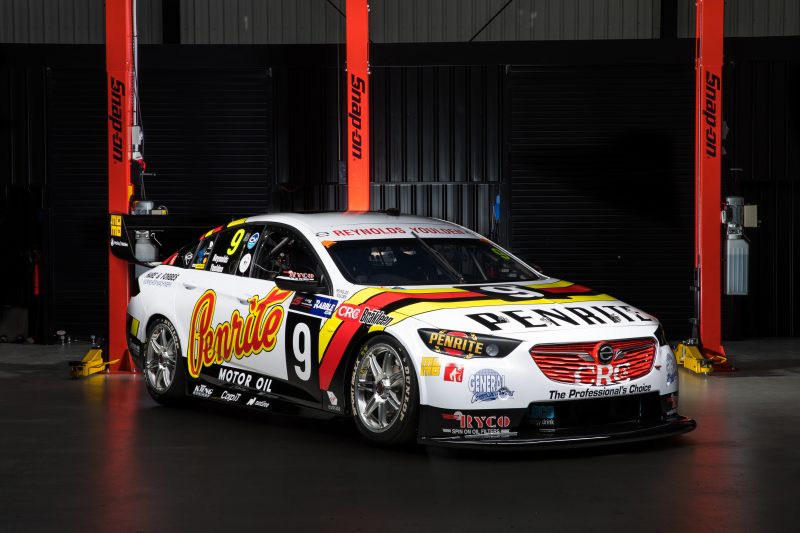 Erebus Motorsport has played up to its underdog status by paying tribute to another unfancied Bathurst winner by changing both of its Holdens to Graeme Bailey Chickadee liveries.

Defending Great Race winners David Reynolds and Luke Youlden will this weekend drive a #9 Commodore which replicates the look of the VK which Allan Grice and the Central Coast chicken farmer triumphed in at Bathurst in 1986. Major sponsor Penrite’s logo has been replaced by its name in the script of Chickadee, which Bailey owned, and Hare & Forbes logos feature in a similar position on the rear quarter-panel.

Grice did the lion’s share of the driving that day in a relatively underfunded car, with the win representing a major upset against factory-backed operations. Like Reynolds and Youlden last year, the #2 Commodore won the race from second on the starting grid. 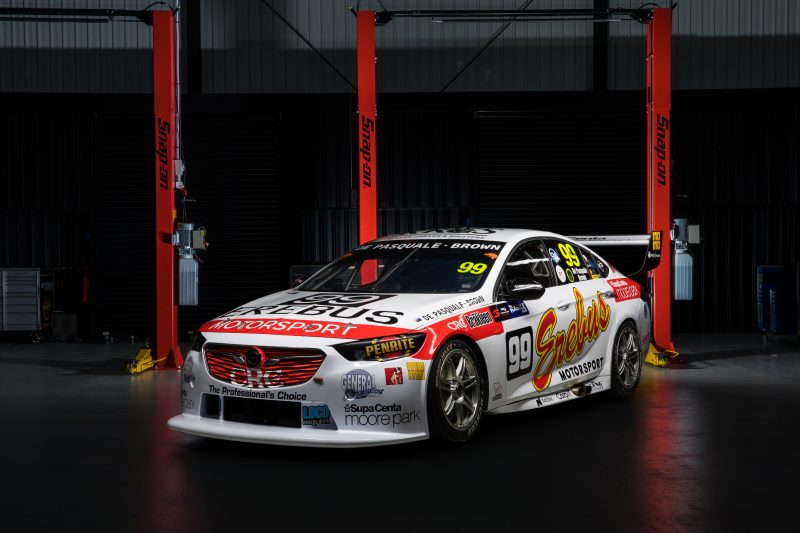 In keeping with the theme, Erebus’ other car has been transformed to mimic the Toyota Celica in which Bailey won his class in the 1982 Sandown 500. Dick Johnson Racing’s rich history, many years of which were spent with Shell, gives the Queensland outfit any number of options to use come retro round.

On this occasion, Shell V-Power Racing has turned back the clock three decades to the year when the red Sierras of Johnson and John Bowe finished first and second respectively in the Australian Touring Car Championship, winning eight of the nine championship rounds between them. 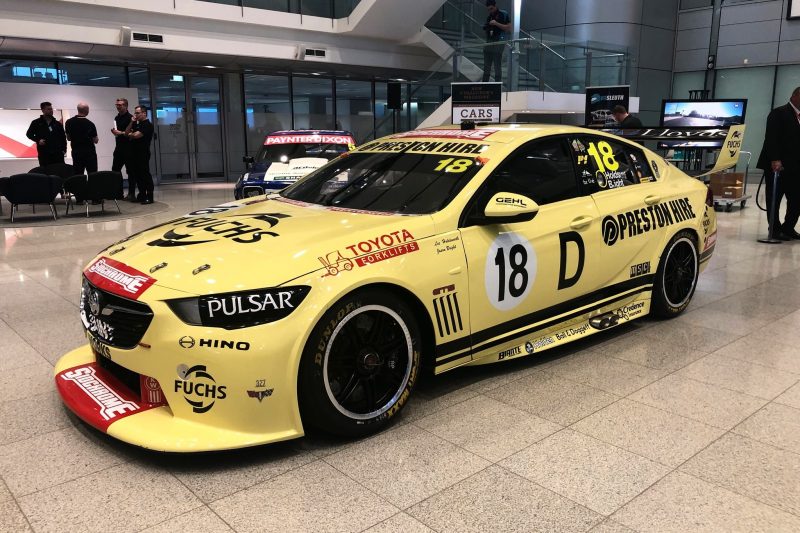 Preston Hire Racing has gone back even further to mark the half-century anniversary of Holden’s first win in the Bathurst 1000 (then 500 miles) which passes later this year.

The team has exchanged its bright yellow for a more muted tone to match that of the Holden Monaro driven by Bruce McPhee and Barry Mulholland at Mount Panorama, when the former drove all but one lap to satisfy race regulations. 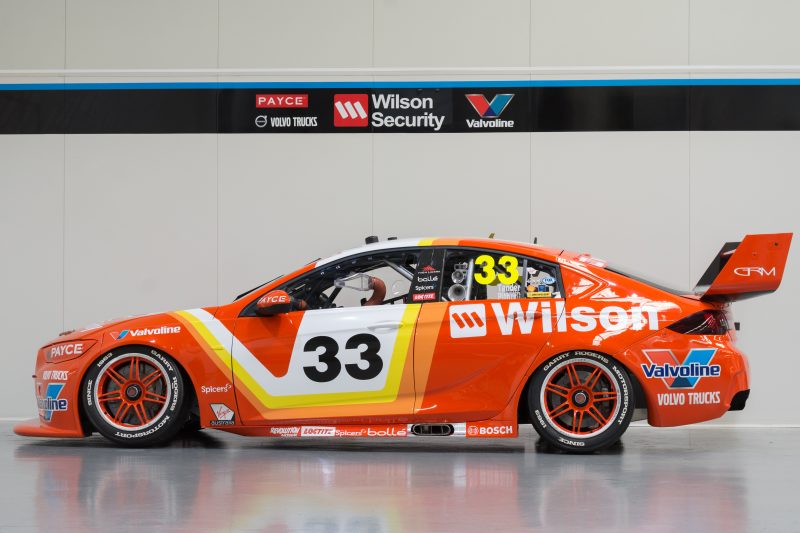 Garry Rogers Motorsport has again opted for completely different retro liveries for its usually similar-looking Holdens, inspired by the career of team owner Garry Rogers himself.

Garth Tander and co-driver Chris Pither will pilot an eye catching red, orange and white look on its #33 ZB Commodore that was carried by the A9X Torana which Rogers drove alongside five-time Australian Touring Car Champion Ian ‘Pete’ Geoghegan in the 1978 Bathurst 1000.

While the race didn’t yield much in the way of a result as the car was retired after 29 laps, Rogers tells a colourful recount of how he came to be driving it. 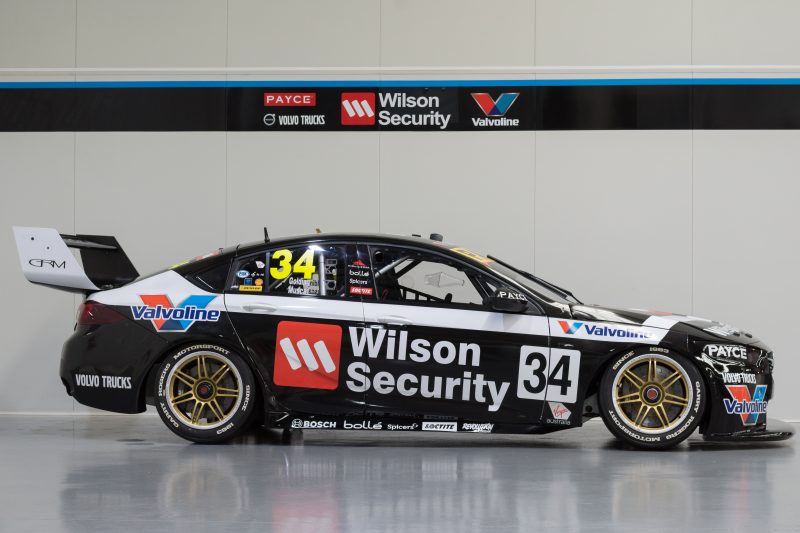 GRM’s second Commodore takes on the look of the Soundwaves Discos VH Commodore which Rogers shared with British businessman Clive Benson-Brown in 1983, the first ‘new’ race car that he drove. 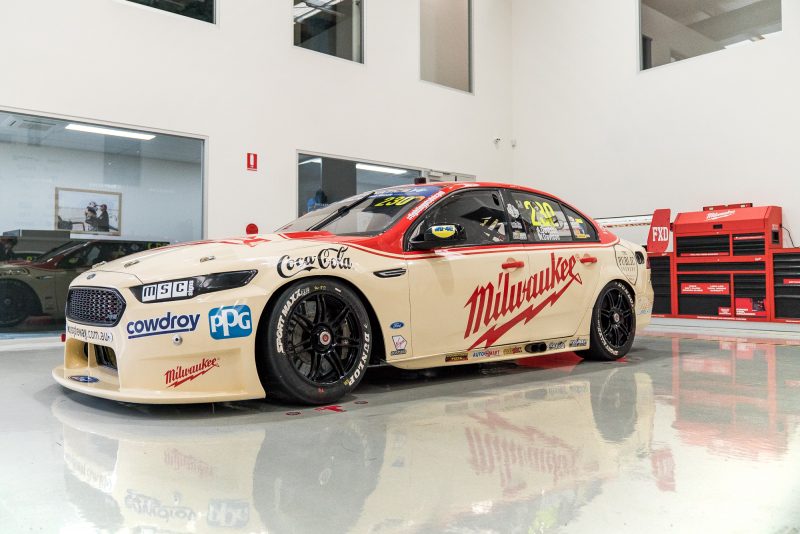 The jagged red lines on 23Red Racing’s Milwaukee Falcon have been replaced by a vintage cream look for Sandown.

The presence of the Davison brothers at the team is somewhat retro in itself given that uncle Jon was a long-time promoter of the Sandown 500. 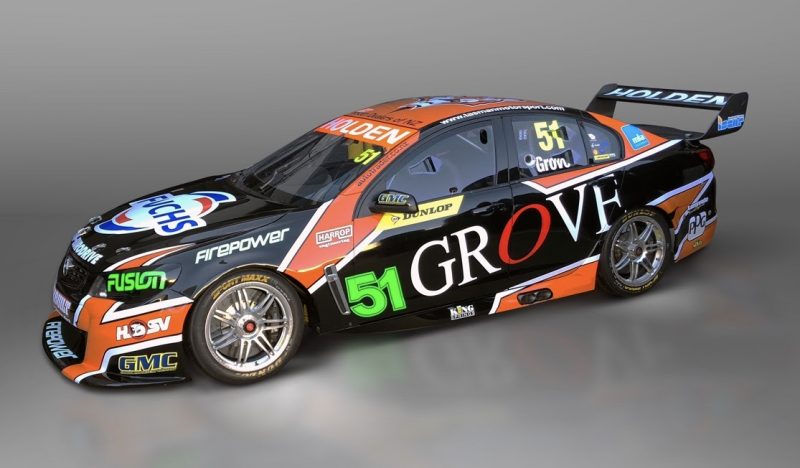 For the first time, a Super2 Series team has commissioned a retro livery especially for Sandown with Grove Racing featuring a full 2007-spec Tasman Motorsport livery.

Brenton Grove’s VF Commodore fully replicates the look of the Tasman cars at Oran Park that season, Grove’s first weekend as a motorsport sponsor, complete with logos of the team’s backers of the day.

What is your favourite retro livery? Cast your vote in this special edition Pirtek Poll.