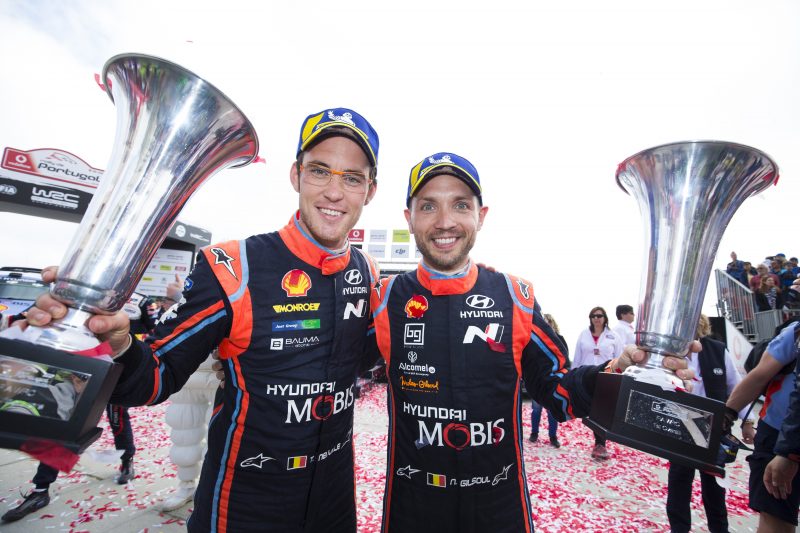 The Belgian’s contract will take him to at least the end of 2021 at Hyundai, which will be his eighth season with the Korean marque.

Neuville will continue to work alongside co-driver Nicolas Gilsoul, whose own three-year extension was announced at the same time.

Together, they gave Hyundai its first WRC event podium (Mexico, 2014) and event win (Germany, 2014), the latter being their own maiden victory as well.

“I am really happy to sign a new three-year contract with Hyundai Motorsport,” said Neuville.

“We have improved a lot in recent seasons, and it has always been my target to build continuity for my career by remaining with this team.

“Since 2014, we have shared many special moments together, as well as working through some more difficult times. Our debut victory together in 2014 remains a highlight, and we have since taken more wins together.

“Alongside Nicolas, who has played a key role in our successes, our focus is on completing this current season in the strongest way possible, aiming to secure the titles.

“From there, we will continue to build, hopefully, to an even brighter future with Hyundai Motorsport.”

Team Principal Michel Nandan said, “We are delighted to extend our relationship with Thierry and Nicolas for a further three seasons.

“They have both played a crucial role in building up the Hyundai Motorsport WRC program over the past five years, helping us to many important milestones along the way from our maiden victory in Germany 2014 right up to our current championship battle.

“As we build towards an exciting conclusion to this year’s WRC, with drivers’ and manufacturers’ championships still delicately poised, it is important for us that we can already look towards 2019 and beyond.

“Thierry and Nicolas have proven to be outstanding ambassadors for Hyundai on the global motorsport stage, and they are very well respected – in and outside of our team.”

The Belgians’ re-signing means that two of Hyundai’s drivers are locked in for 2019, with Andreas Mikkelsen having penned a two-year-deal after joining the German-based team during 2017.

New Zealander Hayden Paddon and Spaniard Dani Sordo, who have alternated in the squad’s #6 i20 this season, are both off-contract.

Neuville currently leads defending champion Sebastien Ogier, who is in the final year of his own agreement with M-Sport, by 23 points while Hyundai is 13 in front of Toyota Gazoo Racing in the manufacturers’ championship.

Round 10 of 13 is Rally Turkey, starting early tomorrow morning (AEST).