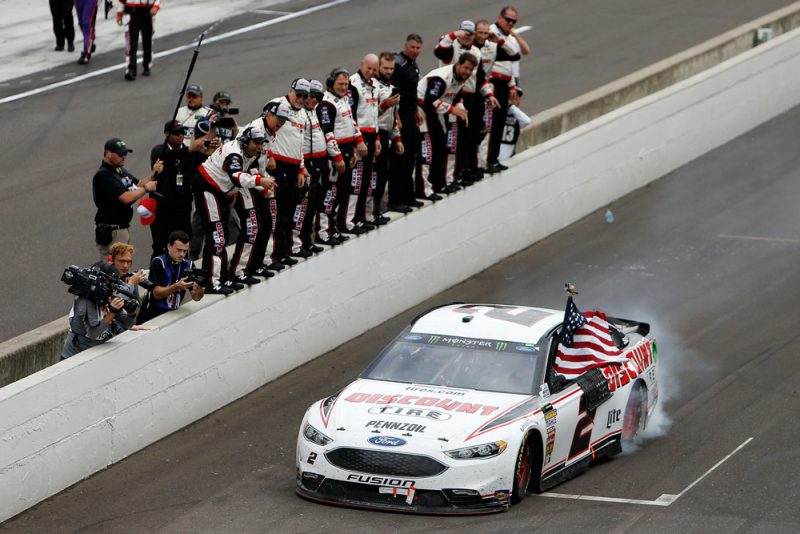 Brad Keselowski celebrates with a burnout after winning the Brickyard 400

Penske has claimed its second success of the year at the Indianapolis Motor Speedway after Brad Keselowski won the rain delayed Brickyard 400.

The Brickyard 400 had been postponed to Monday after persistent rain throughout Sunday forced organisers to delay the race by a day and set the grid based on owner’s points.

It was Keselowski’s second win in as many weeks, and Penske’s first in NASCAR Cup Series competition at Indianapolis after 25 previous attempts.

In May, Penske won the Indianapolis 500 for the 17th time, with Will Power the first Australian to win the race, and followed success on the road course variant of the Indianapolis circuit earlier in the month.

Mounting a late challenge on Denny Hamlin following a restart with three laps to go, Keselowski used fresh tyres to move into the lead with just over a lap to run.

The Penske driver had been among the last to take his final stop, taking to the lane moments before the caution flew for debris.

Using his tyre advantage, Keselowski moved quickly through the field to sit third when Landon Cassill and Jeffrey Earnhardt tangled.

In the resulting three-lap run to the flag Keselowski proved too strong for Hamlin, who took over out front when Clint Bowyer spun his wheels at the restart.

The Penske driver then pulled clear in the final lap to win from Erik Jones, who demoted Hamlin to third as they headed down the front stretch to begin the final tour.

At the flag, Bowyer fell to fifth behind Kevin Harvick with Kurt Busch sixth ahead of Jamie McMurray, Kyle Busch, Paul Menard, and Ryan Newman completing the top 10.

Martin Truex Jnr was an early casualty after blowing a left-front brake rotor after 40 laps, the 2017 series champion dragging the #78 entry home 40th.

Eighth was enough for Kyle Busch to seal the regular season championship, a title which carries 15 bonus points into NASCAR’s playoffs.

It leaves Busch with a total of 50 bonus points courtesy of six race wins and five stage successes during the regular season.

Keselowski heads into the post-season races fourth in the standings, while Jimmie Johnson and Alex Bowman both scraped through into the Top 16 courtesy of their Brickyard 400 results.

The opening round of the NASCAR playoffs will be held at Las Vegas Motor Speedway on September 16.