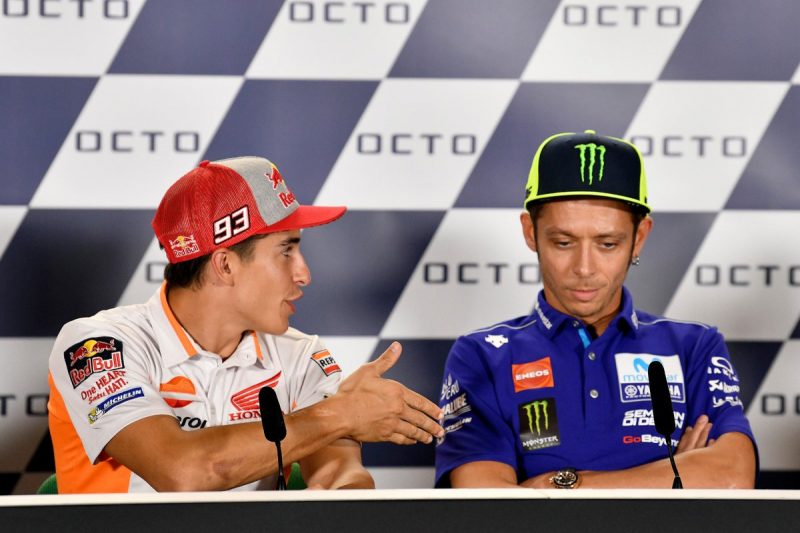 Valentino Rossi has turned down an offer of a handshake from Marc Marquez after the latter’s comments about ‘making peace’ with the Italian.

The two superstars infamously clashed at Sepang in 2015 in an incident which saw Rossi put to the back of the grid for the season-ending race which followed.

Their relationship seemed to have thawed again in 2016 before another major spat in Argentina in April this year when Rossi crashed as a result of a lunge by Marquez in wet conditions.

In the lead-up to this weekend’s San Marino MotoGP, Marquez told Italy’s Sky Sport MotoGP HD, “I would like to make peace with him, I have no problem with Valentino.

“In Argentina, everything was quieter. I made a mistake and with it came bad luck with Rossi, I also tried to apologise.”

Rossi claimed that there was no issue between the two when the comments were put to him during the Thursday press conference at Misano.

“I hear this, but I don’t know… It sounds to me a bit strange, because in reality we don’t have any problem between me and Marc,” said the Movistar Yamaha rider.

Rossi was then asked if he would shake hands with Marquez, and what the Spaniard thought of Rossi’s assessment of the situation.

The Repsol Honda rider responded, “For me it’s nice, and of course if it’s no problem (for Rossi), for me no problem… ”

Marquez, who was seated next to Rossi, then offered a handshake but the latter smirked, shook his head, and remained with arms folded.

“It’s like this. I mean, what can I say?” said Marquez in reaction to the snub.

“Already, second time… No problem, I will race the same.”

Rossi then reiterated his stance: “We don’t need to shake the hand. We are okay. We don’t have any problem.”

Marquez currently leads the championship while Rossi is 59 points behind in second position.

Practice at Misano begins this evening (AEST), with qualifying tomorrow night from 2210.