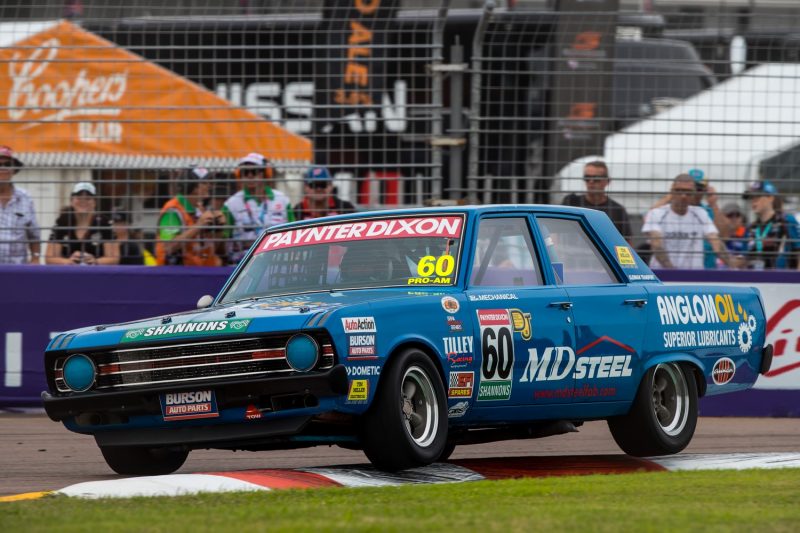 Cameron Tilley has replaced the six-cylinder engine in his Valiant Pacer with a V8 ahead of Round 6 of Paynter Dixon Touring Car Masters at Sandown.

While Tilley is currently fifth in the outright standings and leading the ProAm class, he says that he simply wanted to see what the 1969 Pacer is capable of with a V8 under the bonnet.

“The biggest reason for making the change is that one day I’m going to pack everything up and retire and before I do that I wanted to know what this car could do with a V8,” said Tilley.

In place of the straight Hemi-6 is a 358ci factory Mopar engine sourced from the USA.

Tilley stresses, however, that the necessary upgrades to the Pacer are backwards compatible should the V8 not perform as desired. 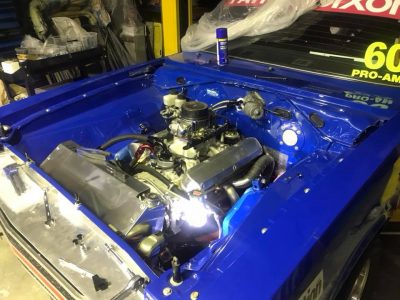 The V8 in the engine bay

“It may turn out to be the right thing, and if that is the case everything I have done is 100 per cent reversible to just put the six back in,” he noted.

“It has been a massive job because you just can’t get any Mopar bits any more. We’ve made the extractors, the exhaust, altered the K-Frame to accept the sump and made engine mounts so both engines will drop in.

Although the Anglomoil/Glennan Transport will now be subject to a higher minimum weight under TCM regulations, Tilley believes that the new engine will more than offset the loss in lap time.

“The car is about 140kg overweight as it is, so we have been running it at about 1340kg even though the minimum weight with the six was 1200kg,” explained Tilley.

“With the new engine we will run at 1500kg but the extra grunt will be welcome, especially at Sandown.

“Whether it knocks about the handling or the power steering, we don’t know. But it has to be faster on tracks like Sandown and Bathurst.

“I’m not saying everyone else better watch out because we don’t know how it will respond or change the handling of the car.

“But I’m looking forward to rolling out of pit lane with it. Another 150hp is pretty exciting.”

The Pacer is set to get its first race running in a club event in Sydney this weekend, before TCM runs on the Rabble.Club Sandown 500 support card on September 14-16.

Meanwhile, Marcus Zukanovic has released footage of his new XD Falcon being shaken down at Winton ahead of its debut at Sandown.

It will not be the only XD racing at the Melbourne circuit as Damien Gambold also joins the field in a car updated from the Improved Production specification in which it has raced at Victorian state meetings.