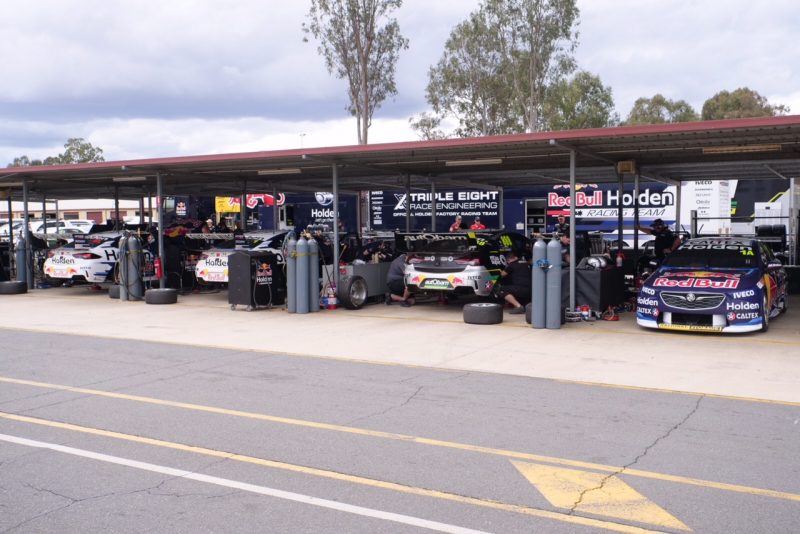 Triple Eight has brought four Supercars to its pre-Pirtek Enduro Cup test day at Queensland Raceway with the team planning to do a routine check-up on its ride day car that will be used at Sandown.

Supercars has permitted the team to run its ride day car at the test although under strict instructions not to use the chassis for testing purposes.

Numbered 1A, the ride day car, which is Triple Eight’s ZB Commodore development chassis, is only expected to complete a couple of laps to allow the squad to ensure it is ready for a ride day on the Monday after next weekend’s Rabble.Club Sandown 500. “One (car) is not really running, it is doing two laps, it is just the ride day car,” team manager Mark Dutton told Speedcafe.com.

“We won’t run four (cars) at a time at one stage. We just want to make sure it doesn’t have any issues when we put passengers in it at Sandown.

“It is good that Supercars have applied common sense and have said as long as you guys do the right thing and not try and have four cars testing then you are ok to do a check on it.”

The squad has a full complement of drivers and co-drivers on hand for today’s test, which will feature a mix of co-driver running, driver change practice, alongside brake disc changes to prepare for the mandatory in-race change at the Supercheap Auto Bathurst 1000 in October.

Co-drivers have been doing the bulk of the running with two-time Le Mans 24 Hours winner Earl Bamber behind the wheel of Shane van Gisbergen’s #97 Commodore he will share for the enduros.

It is the first time he has driven the car since the additional driver session at Winton in May.

“Earl has been lightning quick which is good; Shane had to jump in to make sure he was quicker,” Dutton added.

“It is the usual enduro program but we will try and squeeze in as much as we can.”

The test has run largely uninterrupted with only a short shower sprinkling the track during the lunch break.