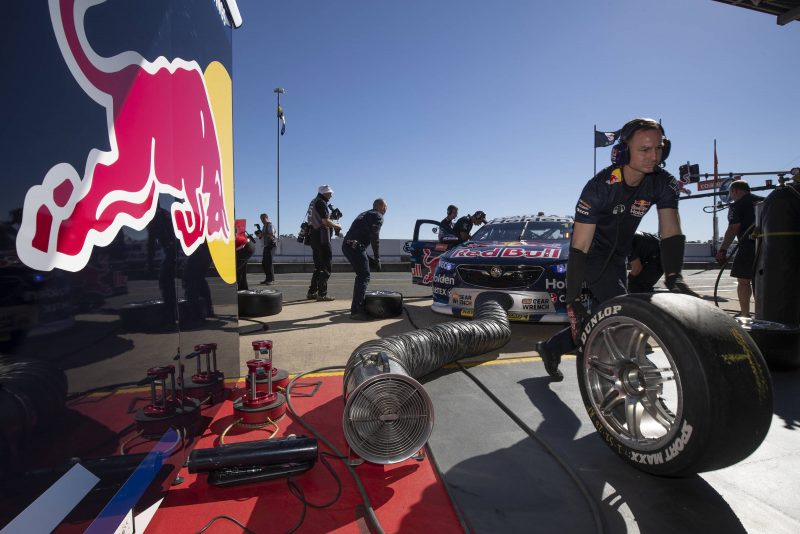 Simulating in-race brake rotor changes will be among the items Queensland teams will focus on at today’s pre-Pirtek Enduro Cup test day.

Shell V-Power Racing, Triple Eight, Tekno Autosports and Matt Stone Racing are all set to head to Queensland Raceway for what is expected to be a crucial final test of the season.

In addition to a recent brake upgrade, Supercars has added a mandatory brake disc change to be completed during the race which has been incorporated into the rules to help prevent brake issues that have arisen in recent races at Mount Panorama.

To complete this task the championship has stipulated the addition of two extra crew members to work on a car during a brake change.

Shell V-Power Racing managing director Ryan Story says his team has spent a lot of time preparing for this extra challenge at Bathurst.

“In terms of the rotor spec change, it’s all fairly straightforward. The priority, of course, is basically the practice work for the rotor change for Bathurst. That’s really been a big focus of ours for quite some time,” Story told Speedcafe.com.

“We’ve had the ability to change rotors in a pit stop before without having had the need to do it previously, so we’re prepped on the design and engineering, manufacturing front.

“It’s just a matter of getting the process down and making sure we can do that in a fuel stop. It’s been a focus of ours for quite some time.”

Tekno Autosports team manager Adrian Burgess expects his crew to spend time perfecting the procedure today after revealing that it too has been a key area of development for Triple Eight, who are the squad’s technical partners.

“At Bathurst with the rotor change is a big one so we’ll be doing that and working closely with Triple Eight and (Craig) Lowndes’ crew, so we’ll be doing brake changes and all the pre enduro stuff,” Burgess told Speedcafe.com.

“It could (throw a spanner in the works during the race).

“If you get it right then it can be as easy as just doing the pads. And if you get it wrong, you could be sitting there on the pit lane for, you know, longer than you want to be, and you’re losing time, so yes it’s going to be important.

“I know Triple Eight especially spend a lot of time and energy and resources to make sure that we come up with a good package that’s going to be safe, is the first thing for the driver and then, essentially quick and reliable for the mechanics to perform in the stops.”

Teams could also face a battle with the weather with an 80 percent chance of rain predicted for the Ipswich area.

Story says his team will be keeping a close eye on the skies and will call time on its test day before the 11am cut off if conditions are not conducive for meaningful running to ensure it doesn’t lose a test day.

“We’ve got a full program, and it’s going to be weather dependent,” added Story.

“We obviously desperately need rain in this part of the world, but we need as clear a day as possible for us to be able to test effectively.

“We’re watching with bated breath the forecast, and we’ll know more when we get out there.

“We’ll be keeping a close eye on that and make the right call. We’ve got until early mid-morning to make that call, but the way it looks at the moment, it looks like it should be okay. But, we’ll make that call if we need to.”

All four teams in action are set to offer laps to co-drivers with Alexandre Premat eager to cut his first laps this year in Scott McLaughlin’s Falcon. Tony D’Alberto will be on hand to drive the sister car driven by Fabian Coulthard.