Rabat: Leg ‘twisted like an S’ after Silverstone crash

Rabat: Leg ‘twisted like an S’ after Silverstone crash Tito Rabat has described the sickening nature of his injury at Silverstone when his right leg ‘twisted like an S’ after being hit by Franco Morbidelli’s bike.

Rabat returned to Barcelona on Friday where he remains at the Hospital Universitari Dexeus to continue his recovery.

The 29-year-old was one of several to go off at Stowe in torrential conditions during Free Practice 4 for the British MotoGP.

He was then collected by Morbidelli’s Honda as the Italian also crashed, causing Rabat to suffer a broken femur, tibia, and fibula on his right side and collapsed lung.

“I never thought about losing my leg, although I saw it twisted like an S when I was laying on the gravel,” said the Avintia Ducati rider in a press conference in Barcelona.

“I lost a lot of blood and I got scared. I have learned a lesson and from now on every time I crash again I will look back.

“At that moment I saw that (Alex) Rins (who had jumped from his Suzuki when it aquaplaned) was warning me to get out of there, and I saw Franco’s bike coming very fast towards me.

“I stood up and the bike hit my leg, but otherwise it would have been much worse.” 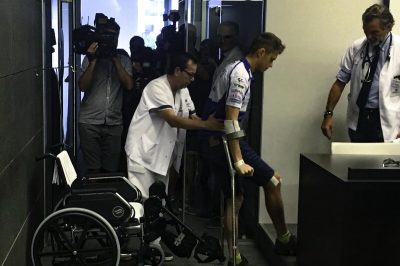 A timeframe for Rabat’s return has not yet been established according to Dr Ignacio Ginebreda from Hospital Universitari Dexeus.

“We have to give it time and we cannot fix a date,” said Ginebreda.

“Tito will recover as soon as possible, but I dare not give a return date. These kind of fractures take time. It will be necessary to evaluate him and the risks that it entails.

“We have planned several actions to accelerate recovery.

“He can get on the bike before the fractures are fully consolidated, but we have to assess the risks.”

Rabat commented, “I feel much better, with a lot of pain, but every day is improving and I now feel ready to recuperate as fast as possible, with the energy to do it.

“The first day after the operation was very difficult, there was so much pain for 24 hours and you can’t sleep.

“Now here at home (Barcelona) it’s better, and I can sleep a bit more but no more than two hours. Last night I slept better, let’s see if that will improve.”

Reale Avintia Racing has not yet named a replacement to ride as team-mate to Xavier Simeon at Misano this weekend.

Ducati test rider Michele Pirro, the most obvious candidate, is set for a wildcard start for the Bologna factory team.