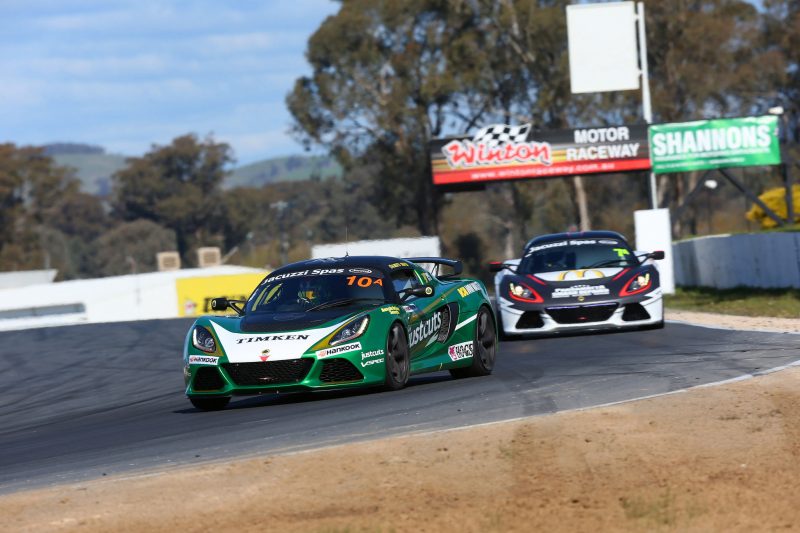 Tony D’Alberto and Grant Denyer have swept Round 3 of Australian Production Cars at Winton after winning Race 2 in a vastly different fashion to the first.

While Saturday’s two-hour race was a thriller, Denyer led from lights to flag in their Lotus Exige in the Sunday affair with D’Alberto not getting behind the wheel.

Denyer had pulled away to a lead of nearly a minute over Jim Pollicina in another Exige as the end of the first hour approached.

Pollicina, who was more concerned with trying to hold out Grant Sherrin (BMW M4) and Tim Leahey (BMW M3), handed over to Ryan Simpson with 36 minutes remaining.

As Simpson ate into Denyer’s advantage, the Simply Sports Cars team decided to save time on a driver change and leave D’Alberto on the sidelines when Car #10 came into pit lane with 30 minutes to go.

They will be credited with the same championship points haul given D’Alberto drove in Race 1, while Simpson came home second despite a spin in the final 10 minutes as he continued to push.

Kyle Alford drove the whole race without stopping for a Lotus sweep of the podium. Jayden Ojeda has won the second round of the CAMS Australian Formula 4 Championship double-header with two race wins on the Sunday.

Ojeda’s (AGI Sport) wins in Races 1 and 3 bookended a third placing in Race 2, and sees him leave Winton with a 21-point championship lead.

Aaron Love (Team BMR) finished second for the round with a maiden Formula 4 race win in Race 2.

Ryan Suhle (AGI Sport) is second in the championship after the Saturday round winner finished the Sunday round third with race results of second, fourth, and third.

Cameron Shields (Team BRM) is six points back in the standings having finished Round 5 in fourth.

Round 6 takes place at the Sydney Shannons Nationals meeting. 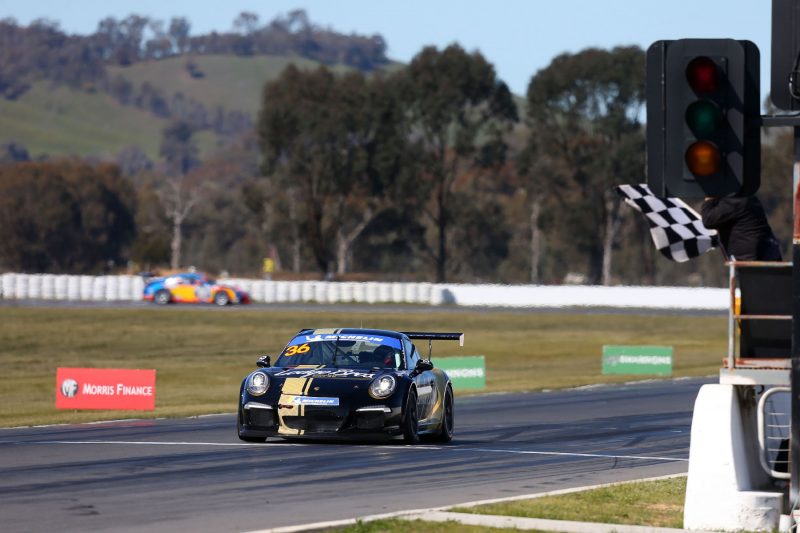 Cooper Murray has returned to the top of the Porsche Michelin GT3 Cup Challenge standings with wins in both Sunday races.

Murray won Race 2 of the weekend by 2.3s and Race 3 by 3.7s, while overnight series leader Simon Fallon was second on both occasions.

Jimmy Vernon narrowly beat Max Vidau to third in Race 2, while Chelsea Angelo drove from the back to sixth, behind Tom Taplin.

Vidau turned the tables on Vernon to finish third in Race 3, while Angelo gained one position over the 12 laps.

Marcel Zalloua and Daniel Stutterd split the day’s Pro-Am class wins as Christian Pancione took Class B honours in both.

Murray’s lead is now 11 points ahead of the finale at the Sydney Shannons Nationals meeting. Nick Kelly has won the 2018 CAMS Australian GT Trophy Series with finishes of second and fifth in the weekend’s two races.

Kelly started Race 1 from pole and finished not far behind winner Scott Taylor before a cautious run in the final race of the season.

Matt Stoupas won the latter encounter ahead of Dave Stevens.

Cameron Beller has won the Porsche 944 Challenge invitational round thanks to a second placing in Race 2.

Chris Lewis-Williams won that race in a reversal of Saturday’s top two, but failed to finish the Handicap race.

Honours in that race went to Peter Doherty, ahead of Mark Taubitz and Paul Crocitti.