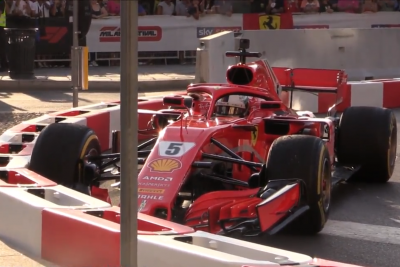 Sebastian Vettel has explained that his unfamiliarity with Kimi Raikkonen’s steering wheel led to his crash in the F1 Live event in Milan.

Vettel damaged the front wing on the Ferrari he was driving after running into a plastic barrier in the Italian Grand Prix lead-up event.

The German was in fact using Raikkonen’s car, despite it featuring his own #5 plate, and was caught out by the Finn’s different clutch configuration on the steering wheel.

“I went with the car and the steering wheel of Kimi, who had the clutch on the other side.

“I didn’t think about it, and at that point I was too fast. I asked if it would be possible to change the wing to do two more laps for the fans.

“Obviously it was my mistake, but that’s OK.”