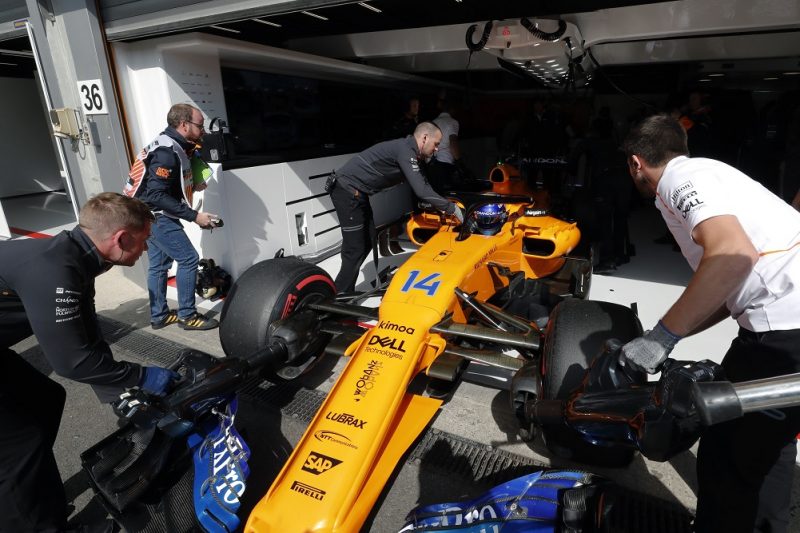 McLaren has replaced this chassis which Fernando Alonso drove at Spa

Fernando Alonso faces a lack of current-specification spare parts when he drives a replacement chassis at Monza after the huge first-corner crash at Spa.

McLaren will attempt to field Alonso with the engine which he used in Belgium but even then the team will not be certain until he runs during Friday practice in Italy.

The #14 McLaren was clouted by Nico Hulkenberg when the Renault driver made an error under brakes at La Source, causing Alonso to ride over the top of Charles Leclerc’s Sauber.

Given the extent of the damage, the Spaniard will revert to a chassis which he drove earlier in the year, while the shunt has depleted McLaren’s spare parts bin.

“It is a chassis I used in winter testing or the first races, so it’s something that we already raced with but it’s a new chassis,” explained Alonso.

“On the engine side we think it could be OK but we will probably find out (on Friday) in FP1.

“We want to put it in and confirm that everything’s OK. There were some concerns on Sunday, then Monday and Tuesday they checked everything properly and it seems OK so hopefully we can run still with that engine.

“But the full car, not only the chassis but also the floor, the front wing – things we are limited on parts as well – have gone. It was quite expensive.

“We have enough (parts) luckily but probably we’ll run out of spare parts. We have just what we have on the car, and all the rest will probably be a different specification.

“It’s quite tough because the damage on the cars was quite extreme, especially on my car, and then you have four days only to build a completely different car for Monza. It’s the way it is.”

Alonso is confident, however, that he will hold up physically despite experiencing right wrist and back soreness as a result of the crash.

“Yes, (the wrist is) fine. It was (sore) on Sunday a little bit, and I’m still feeling some kind of heat there, because I had the hands on the steering wheel when I touched Leclerc. Every day it’s less and less, and it should be OK for (Friday).

Regarding his back, he added, “Honestly the only painful day was Tuesday. On Sunday it was fine, on Monday it was OK, but on Tuesday when I woke-up I had the back, I felt a little bit sore, and a little bit of a pain there.

“But yesterday (Wednesday local time) was fine, (Thursday) was fine, so it was all OK after that.”

Alonso does, however, still have an engine penalty hanging over his head meaning that Spa was, in effect, a wasted opportunity.

McLaren handed new engine elements to Stoffel Vandoorne, which put the Belgian at the back of the grid, but left Alonso’s package as it was to take advantages of penalties for other entries.

“Because of the penalty of Hulkenberg and Bottas and Sainz we opted not to change the engine in Spa, and benefit from the P14 starting position, and then on the first corner you’re out of the race,” lamented Alonso.

“You will have to pay the penalty either in this race or later on, so it’s a double zero – one in Spa because of another guy, and another one when you take the penalties. So quite a sad day.”