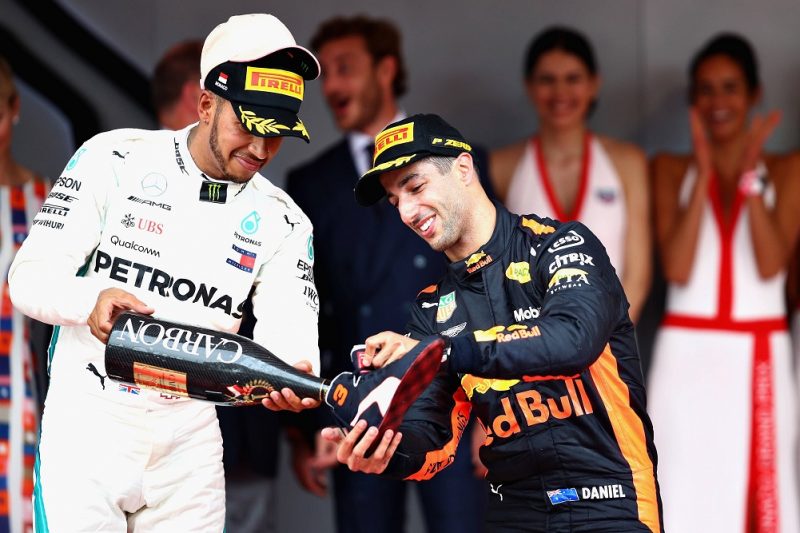 Lewis Hamilton has lauded Daniel Ricciardo’s ‘brave’ decision to sign for Renault, likening it to his move from McLaren to Mercedes.

Ricciardo is leaving his long-time home in the Red Bull system to race for the factory Renault team from 2019 under a two-year deal.

Hamilton similarly cut ties with McLaren to take up a drive with the works Mercedes squad in 2013, going on to win three more world championships with the Brackley operation so far.

The Brit agreed with Red Bull Racing boss Christian Horner’s comment that the move is “an enormous risk” but complimented Ricciardo on the decision nevertheless.

“I obviously know what mine (risks) were and they will probably be similarities within it, and I am really happy for him,” said Hamilton.

“It’s always brave to make a decision that’s out of the norm knowing that people are going to have opinions about it and that it’s still halfway through the season not knowing which way the next year is going to go.

“It’s an exciting period for him. A lot of people in life are scared of change and therefore get stuck in a space that is not their happiest space but they get by.

“It’s cool to see Daniel, similar to me, is wanting to elevate himself and wanting to try something new, good or bad, and take the risk.”

Hamilton’s switch came a year before the advent of Formula 1’s hybrid era, during which Mercedes has been the clear benchmark.

Having won a single race in that first year, he has claimed another 45 victories in just over four-and-a-half seasons since.

Ricciardo has spoken of the need for a “fresh start” on social media and said in response to questions prior to the Belgian Grand Prix about a falling out with Red Bull that he was simply sick of the “routine”.

However, his departure coincides with Red Bull Racing’s call to emulate its junior team Scuderia Toro Rosso in running with Honda engines next year, while Renault has continued to up its resources at its race team since repurchasing what had morphed into Lotus.

Hamilton would not be drawn on exactly why the Australian made his decision, except to say that he could see ‘similarities’ between Ricciardo’s and his.

“I was there once, so I know what it’s like to be in that position,” said Hamilton.

“I can’t tell you why he made his decision because I don’t know what information he has and what reasons are behind his choice.

“I can imagine there are similarities between them.”

Hamilton leads the world championship by 17 points while Ricciardo is sixth ahead of this weekend’s Italian Grand Prix.