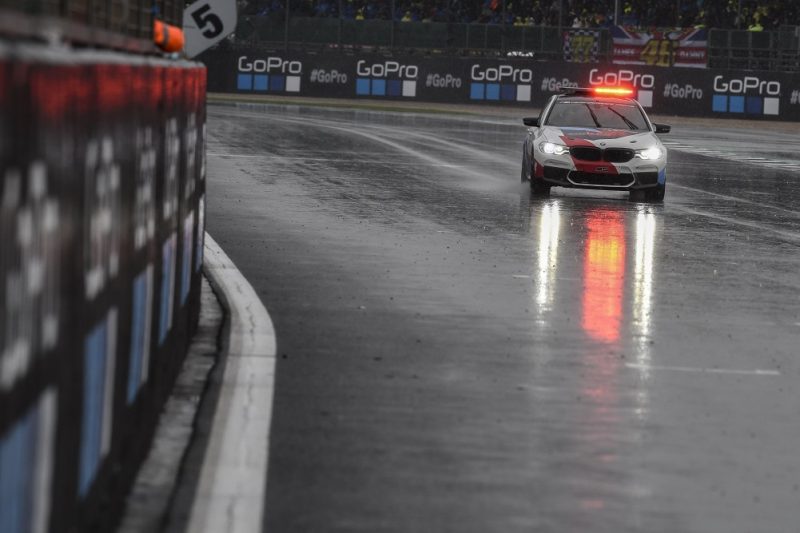 The FIM’s Safety Officer believes that the Silverstone surface has degraded since being relaid in February as the circuit comes in for criticism following the MotoGP washout.

All three grand prix races (MotoGP, Moto2, Moto3) were called off when officials and riders decided that conditions were too dangerous, even as rain abated, due to the prevalence of standing water.

Heavy rain caused havoc during practice a day earlier as a number of riders ran off or went down altogether, resulting in Tito Rabat being hit by Franco Morbidelli’s riderless Honda.

The Silverstone Circuit was fully resurfaced in February but came in for stinging criticism from Lewis Hamilton when Formula 1 arrived in July, when the world champion described it as “the worst job ever” and claimed it was “rattling your freaking eyeballs out of your brain.”

Race Director Mike Webb said that the surface was ultimately the reason for the inability to hold Sunday’s races, despite moving the MotoGP start time forward 90 minutes to 1130 local time in an unsuccessful bid to avoid heavy rain.

“We have reached the point where even though the rain is getting less, the circuit is still not in a condition where we can safely run races,” Webb told a press conference held to explain the decision at Silverstone.

“We’ve had a number of years here in very wet conditions recently with the old surface and been able to run races.

“This year, with the new surface, it’s the first time we’ve encountered quite so much standing water in critical places on the track.”

FIM Safety Officer Franco Uncini, the 1982 500cc world champion, said that the circuit has deteriorated significantly since he inspected it for homologation purposes shortly after the resurface.

“At the time I did an inspection and the tarmac looked very good, in terms of bumps, connections and also grip,” he said of the visit.

“It was confirmed by Cal Crutchlow who did a test on a bike one month later; he said it was a little bumpy and the circuit reacted and then adjusted these bumps.

“But then we discovered during the Formula 1 (round) the circuit was bumpy. So it degraded from March to July; that was the situation of the tarmac.

“They will make a deep study, six weeks, to see what the reason is for this kind of (degradation), because honestly in February and March, it was good.”

Uncini also explained that he had requested changes from Silverstone between he Formula 1 and MotoGP rounds, but that they were was not time for sufficient improvements.

“They tried to solve some small problems but honestly it was so big it was impossible to do,” he explained.

“The dream was to have a completely new asphalt, but there was no time, no possibility to do a new asphalt between the F1 GP and our GP.”

Also “impossible” to simulate before time are how the track will perform in wet conditions, according to Uncini.

Silverstone managing director Stuart Pringle has committed to determining the cause of the problem.

However, he stopped short of criticising the company which resurfaced the circuit until an investigation has taken place.

“If you think there are people who are disappointed about the performance of the track today, you can be assured I stand at the front of that queue,” Pringle told media on Sunday.

“We need to make a serious investigation into this and we need to understand what’s gone on.

“But it would be unfair to round on them now when we don’t have data, and we need data.

The washout represented the first full cancellation of a race since the Austrian round was hit by snow in 1980.