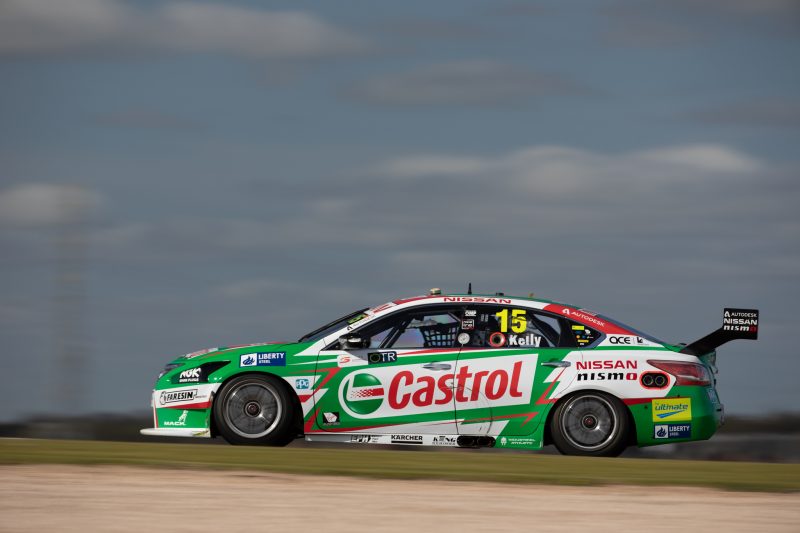 Kelly was one of the star performers on Saturday after turning a fourth place grid spot into second come the chequered flag in Race 22.

The Nissan Motorsport driver qualified ninth for yesterday’s 200km race but was unable to challenge the front runners after losing performance due to the gearbox issue that reared its head early in the race.

After pitting on the opening lap, Kelly persevered around the problem as he nursed the car through the 41 lap race to come home in 17th position.

“We don’t know exactly where the problem is but we had a gear shift sensor failure which cost us a lot of time,” said Kelly.

“Every time we had someone near us, the straight line speed was down so much that we were an easy target.

“Our corner speed was really strong though. But that drama set the tone for the day straight away. We just need to get to the bottom of the issue and ensure it doesn’t happen again.”

“It was coughing and spluttering and it cost a bit of straight-line performance so we have got to get to the bottom of that,” Sinclair told Speedcafe.com.

“We couldn’t do anything about that in the race so we had to push on.

“We lost that pack of 10 cars and he just had to hold station. We didn’t get a feel for how his day was going to go because it happened early in the race.”

After scoring his first podium of the season on Saturday, Michael Caruso was best placed to strike again for Nissan having started from fifth on the grid.

The driver of the #23 Altima briefly held fourth before dropping back behind Craig Lowndes in the early stages of the race.

A decision to short fill during his first pit stop appeared to bring him into play, but the strategy was unsuccessful as he faded to ninth at the chequered flag.

“Michael went for a real aggressive strategy and it was looking alright, and his pace was good but he got held up behind two cars that hadn’t pitted and blew a lot of time there,” added Sinclair.

“He lost probably three or four spots in that last pit stop sequence and came home in ninth, that was how it unfolded.

“Off the back of Saturday it is disappointing for both those guys. We will take away what we have learned here and look forward to the next part of the season.”

It proved a difficult day for the outfit’s other entries for Andre Heimgartner and Simona de Silvestro.

The former retired with terminal damage to the front of his Altima after he ploughed into the rear of Garth Tander’s Garry Rogers Motorsport Holden on the entry to pit lane.

“It was a lapse of concentration which is disappointing,” said Sinclair.

“We spoke about him taking his opportunities in qualifying and he probably did on Sunday but wasn’t able to execute in the race unfortunately.

We will fix that up and once again he is showing he has got the potential and we are fully backing him, but we have got to get those mistakes out of his routine so we can see him up the front more often.”

Meanwhile, De Silvestro finished in 23rd position after her race was hampered by a drive-through penalty caused by an unsafe release during the first round of pit stops.

“The car was pretty good today but we had an issue in our pit stop with merging into the lane,” said de Silvestro.

“I got a penalty for that and we weren’t able to recover the spots we lost. The car felt a lot better today. So we have a lot of positives to take into the endurances races.”