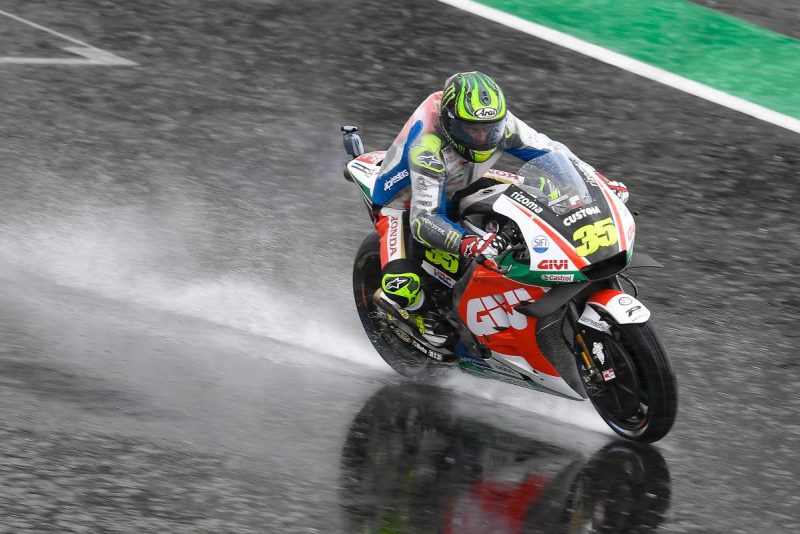 Cal Crutchlow rides through the rain earlier in the weekend pic: MotoGP.com

Heavy rain and dangerous standing water has led to the cancellation of the British MotoGP race at Silverstone.

The start time had already been delayed almost five hours relative to the rescheduled program which was implemented in the hope of avoiding the worst of the weather for the premier class.

However, all three classes have now been washed out and will stand as non-results. They will not be re-run on the Monday, which is a public holiday in England.

“Primarily it’s due to water accumulated on the surface and I think you’ve all seen the results of when we’ve been running in heavy rain, that the circuit in some places is not safe because of the way the water does not drain from the surface.

“We did everything we possibly could to run an event today, obviously the very last thing any of us wants to do is to cancel an event, however safety remains a priority.

“So just to briefly describe that, we attempted to start the race this morning, (and) it was obvious that the tack conditions weren’t safe.

“After that, in consultation with the riders, we made a start delay to discuss the situation further.

“When it was obvious the track condition was not improving – even when the rain abated a little the track surface was still too wet – we discussed various options including running tomorrow, that was discussed with the teams and the circuit, the promoters, the organisers, and it was concluded that was not a possibility.

“The other possibility that the circuit requested, that we agreed with, was to delay today as much as possible until such time as the conditions were safe.

“We’ve reached the point where even though the rain is getting less, the circuit is still not in a condition that we could safely run races, so we’ve taken a very difficult and regrettable decision to cancel.”

The last time all races were cancelled altogether was the Austria round in 1980, which did not run due to snow.

Marc Marquez’s championship lead remains at 59 points ahead of the next round at Misano in San Marino on September 7-9.