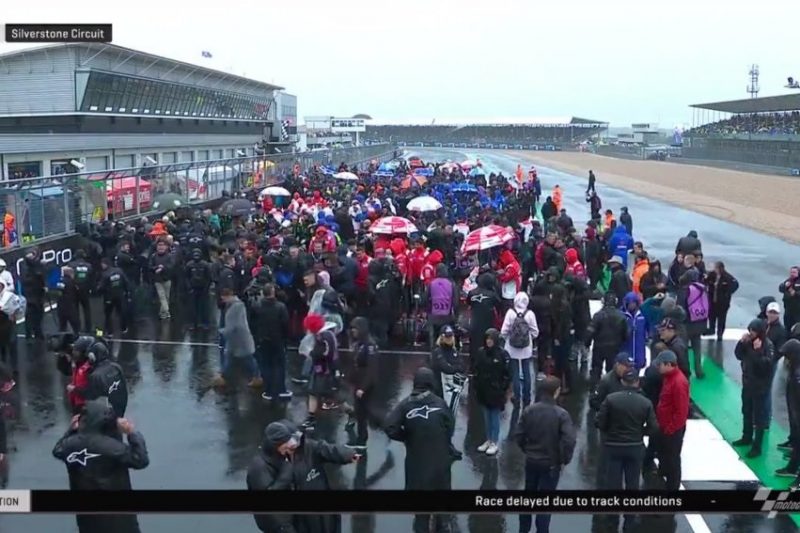 Rain has prevented a start in the British MotoGP pic: MotoGP Twitter

The British MotoGP continues to be delayed due to heavy rain at the Silverstone Circuit.

Race start had been moved forward to 1130 local time/2030 AEST, from the standard 2200 AEST start, in a bid to avoid the worst of the weather.

While the field made it to the grid, the weather meant that no start took place as bikes and riders were sent back to their garages.

The Safety Car and Course Car intermittently completed laps to assess the circuit but there was otherwise no track activity.

With rain continuing to fall and drainage being a problem at the recently resurfaced circuit, officials will attempt to run all three grands prix (MotoGP, Moto2, Moto3) in the late afternoon.

Should it not be possible to start by that time, “race direction will cancel races, starting with the Moto3 race” according to an update from MotoGP’s Twitter account.

It has already been confirmed that races will not take place on Monday at Silverstone in the event that it not be possible to start them on Sunday.

Due to the nature of the track surface, it is unlikely that it is possible to race until the rain has stopped.

If rain has stopped by the latest 16.00 Local Time, all three races will go ahead starting with #MotoGP, with races being completed by 19.30pm

Continued… If it is impossible to start racing at 16.50 Local Time, race direction will cancel races, starting with the #Moto3 race

Torrential rain had already seen Tito Rabat suffer a triple break to his right leg when he was collected by Franco Morbidelli’s bike as several riders went down at Stowe in the latter minutes of Free Practice 4.

The Spaniard has since undergone what his Avintia team described as “successful surgery”.

A warm up had in fact taken place in dry conditions earlier on Sunday morning, in which Maverick Viñales (Movistar Yamaha) was fastest.

Jorge Lorenzo (Ducati Team) will take up pole position in the event that the MotoGP race does go ahead.