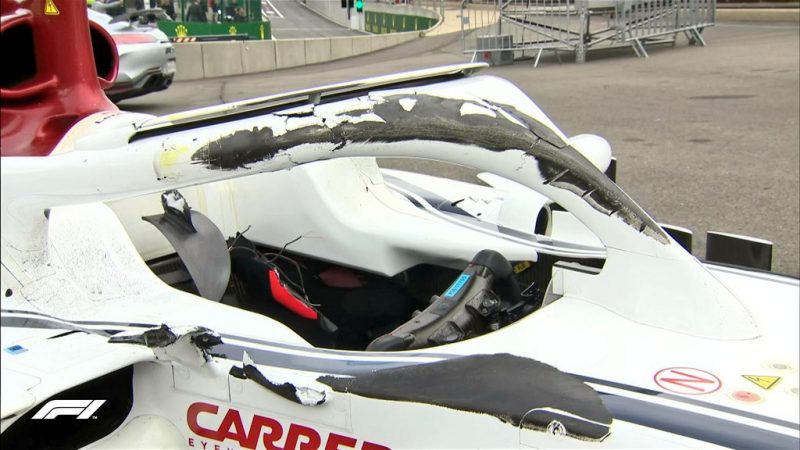 Fernando Alonso believes the three car crash that saw him launched over Charles Leclerc at the start of the Belgian Grand Prix is proof that the halo is doing the job it was introduced for.

Images of Leclerc’s car show the halo prevented Alonso’s car from entering the cockpit area around Charles Leclerc’s head in a dramatic three car crash at La Source on the opening lap.

The incident was triggered by a lock up from Nico Hulkenberg, tagging Alonso who was in turn launched over the back of the Sauber.

Alonso likened the incident to the start of the 2012 Belgian Grand Prix, where Romain Grosjean nearly made contact with the Spaniard who was then driving for Ferrari.

“I think it’s a good proof. We didn’t need any proof, but it’s a good thing,” Alonso reasoned.

“On the start I saw in the mirror Hulkenberg with all four tyres locked, and he was coming at very high speed,” he added.

“There is no way you can avoid that. He hit my car, I think and then I went over Charles.

“Obviously he missed the braking point with high consequences but on the positive side we are all okay and also Charles with the halo whatever is good news that we are all three okay.

Leclerc also credited the halo with protecting him from the flying McLaren.

“Definitely the halo probably helped today but it’s very unfortunate. I think the potential of the race today was big and it’s a shame to finish the race that way in the first corner,” the Sauber driver said.

The incident is set to be reviewed by the stewards, with Hulkenberg claiming the mistake was triggered by the aerodynamic sensitivity of the current crop of F1 cars.

“It’s just incredible to find out again how sensitive these cars are with aerodynamics, when you have a few cars that bunch up in front of you how much grip and load you lose,” Hulkenberg explained.

“When I hit the brakes I obviously instantly locked up the front wheels and then just was sliding into Fernando.

“Probably a misjudgement from my side, a bit too late on the brakes, bit too keen and frustrating obviously for him, for Charles as well, and for myself.”

Also caught up in the incident was Daniel Ricciardo, whose rear wing was swiped off by Alonso’s flying McLaren, before he made contact with Kimi Raikkonen.

While both initially carried on, Ricciardo dropping two laps as Red Bull replaced his rear wing, neither made the flag.