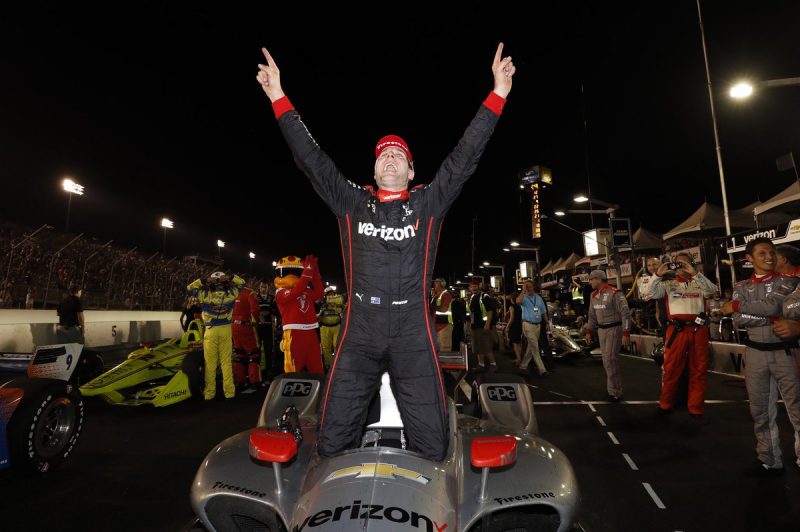 Will Power has won the Gateway 500 in a race dominated by fuel saving strategies, with title rivals Alexander Rossi and Scott Dixon finishing second and third respectively.

The 248-lap race in Illinois was ultimately decided by fuel strategy as some, including Power, opted to splash and dash in the final 15 laps.

The race saw only two Caution periods, one early in the running for Sebastien Bourdais hitting the wall and another for Ryan Hunter-Reay’s mechanical issues, both drivers were forced to retire.

Dixon’s lead in the championship took another hit, with Rossi able to keep the Kiwi behind him in the final laps of the race.

The pair started on the front row of the race after qualifying was washed out and grid positions determined by series points.

There was trouble early for James Hinchcliffe (#5 Schmidt Peterson Motorsports Honda), who wasn’t able to leave the grid with the rest of the field but made it out in front of the pace car.

Rossi, however, quickly regained one position after Newgarden had a big moment down low.

Power then challenged Dixon (#9 Chip Ganassi Racing Honda) for the lead but the field fell under Caution on Lap 1, Dale Coyne Racing’s Sebastien Bourdais (#18 Honda) having made contact with the outside wall as a result of the congested field.

Newgarden was able to capitalise on Rossi’s bad restart on Lap 9 despite the last-start winner’s feisty attempt to defend.

Rookie Zach Veach (#26 Andretti Autosport Honda) was one of the biggest movers in the field on the start going from 16th to 10th.

Lapped traffic started having an effect on Lap 32 as race leader Dixon came up on the back of Carlin driver Max Chilton (#59 Chevrolet).

On Lap 49 Rossi dived under Newgarden, the Penske driver defending all the way to the inside wall on the front straightaway but the #27 Honda prevailed and moved into third.

The top three heading in the first round of pit stops were Dixon, Power and a determined Rossi who was gaining time on the 2018 Indy 500 winner.

Dixon peeled off to pit lane on Lap 60. Rossi and Power both came in two laps later, with no advantages gained during the pit cycle for the top three.

The Schmidt Peterson Motorsports entry of Hinchcliffe was hit with a post-race fine for dropping a wheel nut in the first round of pit stops.

Closing in on Lap 100, Power and Rossi were able to get a run on Dixon with the New Zealander unable to get close enough to lapped traffic to get the benefit of a draft.

On Lap 119 Power went on the attack, trying to get through Dixon but ended up sweeping wide on the high line and falling back in the order.

A few laps later the leading cars came through the pit lane for the second round of stops.

Newgarden was seen slowing just before the pit stops having run high into the marbles in an almost identical incident to his Australian team-mate.

Coming out of the second round of pit stops, the order changed slightly with Dixon leading followed by Rossi, Simon Pagenaud, Power, Ryan Hunter-Reay, and Newgarden; an even split of Honda and Chevrolet power in the top six.

The high side proved tricky with Pagenaud (#22 Chevrolet) the third Penske driver finding himself out in the marbles and losing places fast.

The race came alive on lap 146 when Rossi made a miraculous save while side-by-side with Power.

Rossi was able to keep the #27 Honda out of the wall while the car was sliding out from underneath him.

After his move on Rossi, Power made another lunge for the lead, easily clearing Dixon. The team were quick on the radio reminding Power to work on fuel numbers as the #12 Chevrolet was able to run in clean air.

Following some close run-ins with the wall up and down the field, Carlin driver Charlie Kimball (#23 Chevrolet) became the second driver of the day to make contact but he was able to come to pit lane and prevent a yellow.

A second caution of the race did come soon after on Lap 173, when Hunter-Reay’s Andretti Autosport entry inexplicably lost power.

He was able to bring the car into the pitlane under his own power, though the Honda came to a stop and had to be towed to its pit box. Hunter-Reay retired as the team couldn’t get Car #28 restarted having lost fuel pressure.

Event officials took the yellow running as a chance to sweep the track and the top five all pitted, with Power just beating Dixon to the line.

Newgarden lost out to Veach on the restart, leaving him vulnerable to Chip Ganassi Racing’s Ed Jones (#10 Honda).

Jones was able to do away with Newgarden next, with the #1 Chevrolet falling back to eighth.

The fight for second heated up with 50 laps to go. Rossi made a big move on Dixon but the series leader was able to defend and push Rossi back into the clutches of Jones.

The Chip Ganassi team-mates were now running second and third, with Jones acting as a buffer against Dixon’s main championship rival.

Fuel saving became a factor with 37 laps to go, with Rossi was losing pace and Newgarden venting frustrations on the team radio.

Jones was the first of the leaders to come to pit lane with a handful of laps left for a short fuel.

With 16 to go, race leader Power came to pit road for a splash and dash intending to chase down the fuel saving Rossi.

Power eased passed Rossi, while the others in front head to pit road regaining the lead with 10 laps to go.

The race for the championship came into focus with nine to go, points leader Dixon setting out to hunt down Rossi with lapped cars between the two.

It was a showdown for title rivals in the last two laps, with Rossi’s fuel strategy keeping him just ahead of the Kiwi across the line.

Power kept clear of the field by over a second to win his third race of the 2018 season.

After the last oval of the year, the Verizon IndyCar Series moves to Portland for the penultimate round on August 31-September 2 (local time).