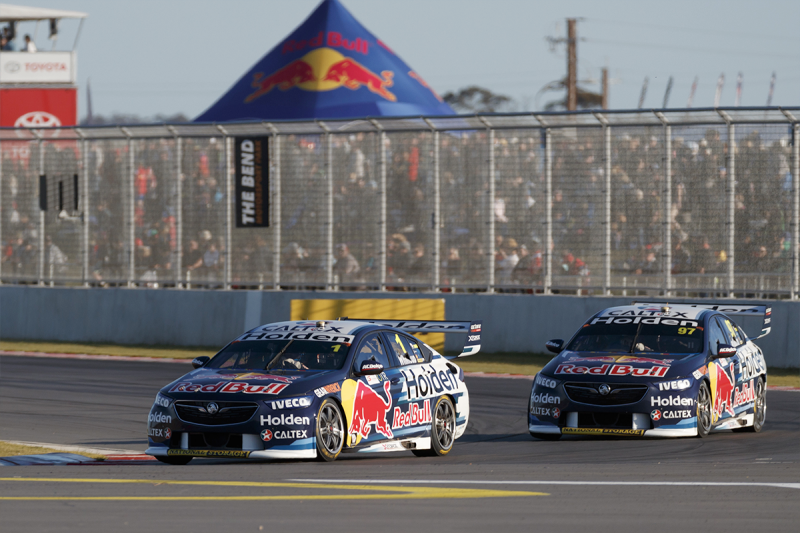 Jamie Whincup has dominated Race 23 at The Bend while Shane van Gisbergen made it a Red Bull HRT one-two and reclaimed the Virgin Australia Supercars Championship lead.

The #1 ZB Commodore led every lap but for pit stops while van Gisbergen spent all but two laps effectively second in the #97 ZB Commodore.

Whincup led the field away from Armor All Pole Position while Tim Slade (#14 Freightliner ZB Commodore) picked up second position from van Gisbergen through Turn 1/Turn 2 and a rapid-starting Craig Lowndes moved from sixth to fourth.

Meanwhile, Michael Caruso had nabbed fourth from Lowndes after Scott Pye (#2 Mobil 1 Boost Mobile ZB Commodore) dived underneath the #888 Autobarn ZB Commodore at Turn 18 at the end of Lap 1 as Lowndes attacked Slade.

Half of that gain was only temporary, however, as Lowndes re-passed Caruso on Lap 2.

With extremely low tyre degradation, more than half of the field had served their respective first pit stops by the end of Lap 3.

Caruso, however, had taken on only 24 litres of his compulsory 120 litre fill whereas Whincup had sunk 46 litres, van Gisbergen nearly as much, and Slade a relatively high 53 litres.

The Nissan Motorsport driver gave up some of that track position when he ran off the edge of the track at Turn 18 on Lap 12, letting van Gisbergen and Pye past.

Caruso brought the #23 Industrial Athlete Altima into pit lane only another three laps later as he and Courtney kicked off the second pit stop cycle despite there being 26 laps remaining.

Courtney’s play had perhaps been prompted by being held up by eighth-placed McLaughlin for several laps.

Pye, Lowndes, and McLaughlin were in a lap later, exiting in the same order as the former two resumed ahead of Caruso as expected.

Whincup was around five seconds ahead when van Gisbergen pitted from second position on Lap 20, and about 10 seconds clear once both had completed their pit stops after Lap 23.

The New Zealander made only minor inroads thereafter before letting the margin drift on the final lap as he took the chequered flag 11.2894s behind his team-mate.

“Great to come back after yesterday but a big thanks to all the engineers at Red Bull,” said Whincup.

“They worked hard before the event to get the cars quick and then just worked together tirelessly throughout the weekend to make sure we had two fast cars. Great to come away with a one-two.”

Van Gisbergen was trying to remain reserved despite turning a 41-point deficit before race start to a 19-point championship lead.

“I saw the purple board (sponsor sign denoting the championship leader), got a bit excited, but such a long way to go.

“We need to keep our heads down but credit to the team. The Red Bull Holden Racing Team has given us some rockets this weekend, one-two, that’s really special.

“But long way to go. We’ve got to keep focused but we’re in a good spot.”

Reynolds gained three positions on the opening lap and a couple more through the first pit stop cycle.

He followed Slade in and out of the pit lane at the end of Lap 23 and inherited fourth when the order cleansed with Mark Winterbottom’s (#5 The Bottle-O FGX Falcon) second pit stop on Lap 30.

The Brad Jones Racing driver had been looking good for a podium since the lights went out but outbraked himself at Turn 1 with eight laps remaining and ceded third position to Reynolds.

Percat had muscled his way past Car #2 on Lap 28, unable to get by when they touched at Turn 4 but making room for himself at Turn 6.

McLaughlin shook out of the second pit stops cycle in 11th, gaining one position when Courtney ran off at Turn 10 on Lap 35.

Courtney fell to 13th by the end, behind Anton De Pasquale (#99 Erebus ZB Commodore) and Chaz Mostert, who started 24th in the #55 Supercheap Auto FGX Falcon.

Wildcard Macauley Jones was 19th in the #4 DrillPro ZB Commodore while Kurt Kostecki completed only the one lap after picking up right-rear suspension damage in a squeeze with Richie Stanaway (#56 Rabble.Club FGX Falcon) and James Golding (#34 Wilson Security ZB Commodore).

Lee Holdsworth pulled the #18 Preston Hire ZB Commodore off the track with a driveshaft breakage at the halfway mark.

Andre Heimgartner was the other retirement having shunted Garth Tander (#33 Garry Rogers ZB Commodore) on their way into pit lane on Lap 3.

They made more nose-to-tail contact as Tander exited his pit box and the damage to the #7 Plus Fitness Nissan Altima proved terminal.

The next event, the Rabble.Club Sandown 500 on September 14-16, marks the commencement of the Pirtek Enduro Cup.