Tyler Everingham has won the 2018 Kumho Tyre Australian V8 Touring Car Series in a nervous finish to the season at The Bend Motorsport Park.

Everingham in fact swept the round but had two hairy moments during the nine-lap season finale.

The first came at the start when he was squeezed against the inside of the circuit on the run to Turn 1 by Jon McCorkindale and the two FG Falcons made contact.

Later that lap, McCorkindale (#69 Mac Motorsport) ran wide at Turn 6 and they hit again in the leader’s passenger side doors, causing the #27 MW Motorsport entry of Everingham to get somewhat crossed up.

With Everingham’s momentum interrupted, Jack Smith nabbed second position before the Safety Car was called for a first-corner incident.

Smith passed McCorkindale into Turn 1 at the Lap 5 restart but ran too deep and Everingham emerged from Turn 2 in first position, followed by team-mate Zak Best (#78 FG Falcon).

Best then ran off at Turn 9 and dropped to the back, before Smith too was off-road in the #21 Brad Jones Racing VEII Commodore at Turn 14 on Lap 6.

By then, Everingham’s margin was over four seconds and growing and the 17-year-old was unchallenged thereafter.

The latter had been turned around by Garry Hills (#76 Mad Hueys VEII Commodore) at the first corner, prompting Jim Pollicina to also swap ends.

His Tasman Motorsport-built VE Commodore was then hit head-on by the unsighted ex-Tasman VZ of Francois Habib, causing the Safety Car.

Earlier, Everingham had a more straightforward time in Race 2 when he led all seven laps. 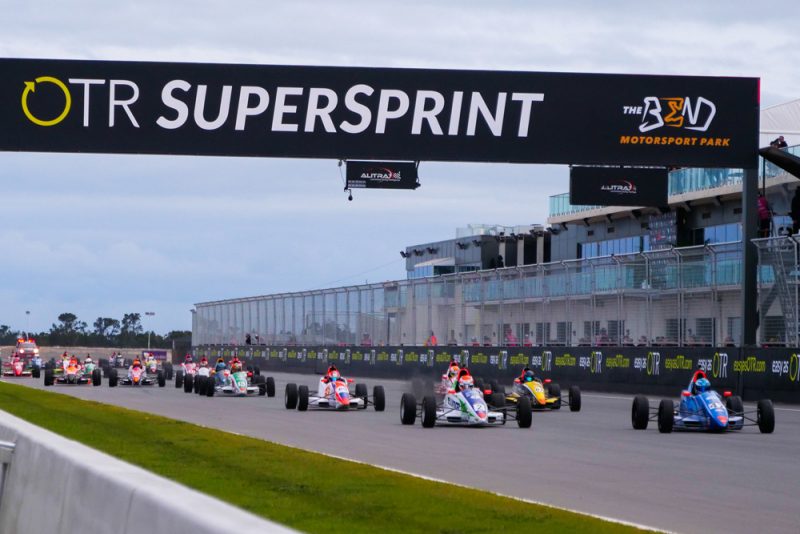 Hunter McElrea has taken out Round 5 of the Australian Formula Ford series at The Bend Motorsport Park.

McElrea won both of Sunday’s races to take out the round, and extend his advantage to 53 points in the process.

“Sonic gave me a mega car all weekend which made my job easy, and I’ve had a massive amount of fun around this awesome track, and the facility is just incredible,” said McElrea.

“The first few laps in each race were tough, but I always managed to get a little break on the field and continue to build on that, for me that was the key this weekend.”

McElrea won Race 2 after Cody Donald got the better start to take the early lead, as Cam Shields spun at the first corner.

It allowed the front two to skip clear, McElrea sliding underneath Donald at Turn 6 to take the lead midway around the opening lap.

The pair swapped positions again at the start of the second lap, Donald going underneath McElrea before the Sonic driver was able to retake top spot courtesy of holding the inside line at Turn 3.

Donald then slipped back into the clutches of Hamish Ribarits, creating a seven car battle for second with McElrea scrambling out to a nearly two second lead as the second placed battle heated up.

As the race wore on the second placed battle saw Ribarits and Tom Sargent sneak off the front to take out the final podium places, with Donald heading home the remnants of the second place pack to claim fourth.

A stunning move around the outside of McElrea and Ribarits saw McLellan take the lead early in the weekend’s final race.

It developed into a nail-biting battle for the lead in the early stages before McElrea found a way into the lead and pulled out a sizeable advantage during the middle of the race.

Sargent clung on for second ahead of Zac Soutar with McLellan dropping to fourth.

Formula Ford now moves to Phillip Island for the penultimate round of the 2018 series on September 28-30. 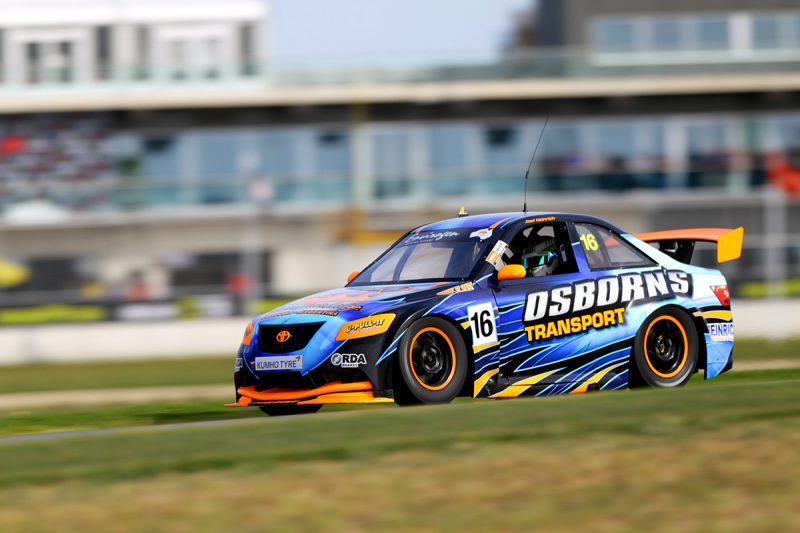 Joel Heinrich completed a near-perfect weekend in Aussie Racing Cars when the South Australian added wins in Races 3 and 4 to the two which he took across Friday and Saturday.

Heinrich started Race 3 from 10th due to the grid reversal and survived multiple early touches with Kel Treseder, having got loose in Turn 16, to run seventh at the end of Lap 1.

He sliced to the lead in the first lap which followed a Safety Car period and went on to win from Justin Ruggier and Josh Anderson.

Starting Race 4 from the front again, Heinrich was headed to the first corner by Ruggier.

That was the first of two spells in the lead for Ruggier as he and Heinrich duelled early on before the local pulled well clear.

Ruggier instead came under threat from Kel Treseder and ceded the position on Lap 6.

He tried to fight back but instead got passed by Daniel Price, who picked off Treseder on the run to Turn 13 on the final lap and gave the Heinrich squad a one-two.

The result means Heinrich closes to one point behind series leader Kyle Ensbey ahead of the penultimate round at Sydney Motorsport Park’s Shannons Nationals meeting on September 21-23. James Wilkins has taken out the third round of the the Toyota 6 Racing Series at The Bend Motorsport Park.

Wilkins recorded a fourth place finish in Race 3, to go with his race win on Saturday, to leave the South Australian venue with 248 points to take the round.

Broc Feeney won Sunday’s only race, skipping clear of the field to win from ahead of Broc Feeney and Declan Fraser.

Nick Carroll spun across in front of the field as they rounded Turn 2 for the first time following contact with Cam Walton, whose car had stepped out after riding the kerb at the apex.

A slide at the exit of the final turn left Walton exposed when the leading trio got to Turn 3 at the start of the following lap.

Both Feeney and Fraser found a way up the inside as Walton ran wide, the scuffle allowing Cameron Crick and Jake Wilkins to claw their way back into the lead battle.

Once in the lead, Feeney opened a comfortable lead to win the race from Fraser, with Crick taking third from Walton almost within sight of the chequered flag.

The Toyota 86 Racing Series is back in action at the Rabble.club Sandown 500 on September 14-16.