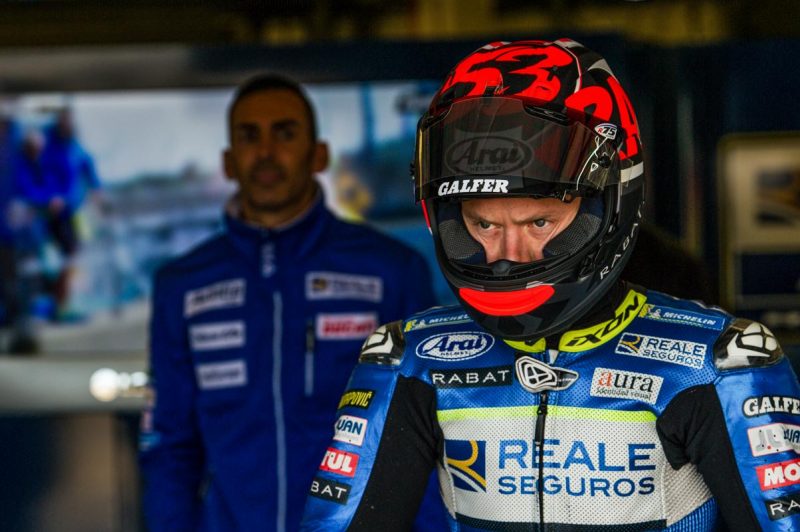 Tito Rabat has undergone successful surgery after his leg was broken when the Spaniard was hit by Franco Morbidelli’s out of control bike in torrential rain at Silverstone.

Rabat was one of four riders to come to grief at Stowe as heavy rain fell late in Free Practice 4 for the British MotoGP.

While standing in the gravel trap after a crash of his own, Rabat was collected by Morbidelli’s Honda when the Italian also went down.

Medical crews attended to the 29-year-old at the scene before he was taken to the circuit medical centre and subsequently airlifted to University Hospital Coventry.

“When Tito got up to reach the safety of the trackside barriers, he was hit by Franco Morbidelli’s bike with full force,” stated the Reale Avintia Ducati team in an earlier update.

“The first medical assessment revealed that Rabat broke femur, tibia and fibula of his right leg.

“The Spanish rider was airlifted to the University Hospital of Coventry by helicopter and will undergo emergency surgery this afternoon.”

It has since provided further news on Twitter, stating that the operation was a success.

“Tito Rabat Surgery at the University Hospital of Coventry has been successful,” read the tweet.

“The fractures of right femur, tibia and fibula have been fixed. He will stay at the UCI hospital until tomorrow.”

UPDATE Tito Rabat Surgery at the University Hospital of Coventry has been successful. The fractures of right femur, tibia and fibula have been fixed. He will stay at the UCI hospital until tomorrow. #vamostito #britishgp #motogp

Alex Rins was one of the riders who ran off at the scene of the incident having jumped from his Suzuki when he aquaplaned on the soaked surface.

“What happened today was incredible, I have no words to describe it,” said Rins.

“When I came out of the (pit) box I saw there was a lot of water on the (Hangar) Straight, almost a hand (deep), and I thought there would be a red flag.

“But I saw they did not put the red flag out and I continued to try and improve my feeling in the wet.

“On the next lap, halfway along the straight, I lifted the gas, and when I tried to brake, I saw the wheels were locking and the wall was getting closer and closer. That’s why I decided to jump off the bike.

“I saw Tito, but he was on his back. I screamed at him and I made gestures, but he could not move.

“I saw that Morbidelli was also losing control. I could not prevent his bike from hitting Rabat’s leg and throwing him two or three metre away. It was a brutal impact.”

Race start for MotoGP has been moved forward to 2030 AEST (1130 local time) in the hope of avoiding more heavy rain which is forecast to fall while the premier class would be on track.