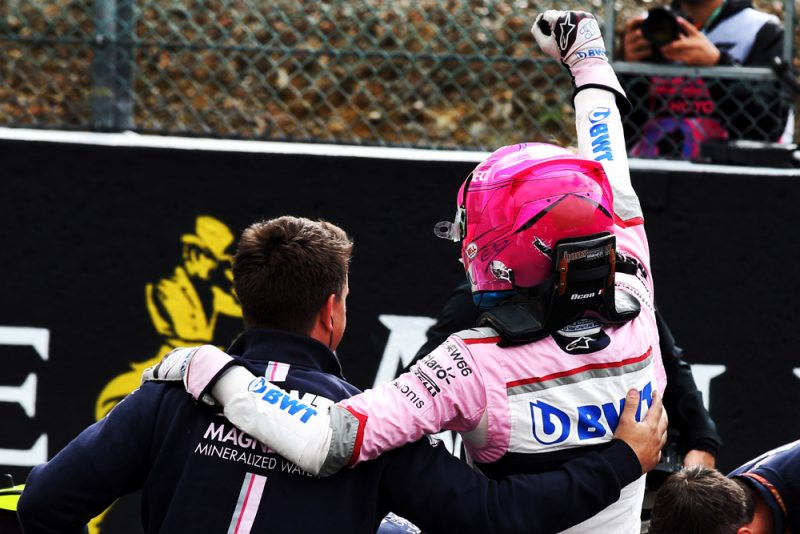 Force India has capped off a tumultuous week in which it was saved from extinction at the eleventh hour by locking out the second row of the grid for Sunday’s Belgian Formula 1 Grand Prix.

A late shower in qualifying shook up the running order late in the hour session, Esteban Ocon recording a career best third with Sergio Perez alongside him.

It was a result that comes just two days after the team faced the prospect of sitting out the event amid legal hurdles surrounding its sale.

Now owned by a Lawrence Stroll-led consortium, the team was stripped of all its championship points and had to re-enter the sport as an entirely new competitor to satisfy the legal requirements to allow it to compete.

“It’s very good. We got lucky with the decisions we made when the rain came. We had a quick car anyway but we didn’t anticipate being that far up the grid, so some good decisions by the engineers.”

Having been instrumental in placing the team into Administration in an effort to protect his colleagues, Sergio Perez was equally delighted with the result.

“It’s a great result after all the issues that we had,” said Perez.

“This kind of result today is amazing for the team, for our partners, for everyone involved, it’s a great result.”

For Ocon the result comes at a time when his immediate future is under a cloud, with Lance Stroll touted as replacing the Frenchman at the team now owned by his father as soon as next weekend’s Italian Grand Prix.

“It’s awesome to be in P3 after such a difficult time with the team we had,” said Ocon.

“Now it’s like we are starting fresh and definitely happy with that result. It wasn’t expected today but the guys did a fantastic job.

“We changed the tyre really quickly to go out, so that was fantastic, and I put a clean lap and managed to get third. Let’s bring it on tomorrow.”