Miller: Next lap would have been pole

Miller: Next lap would have been pole 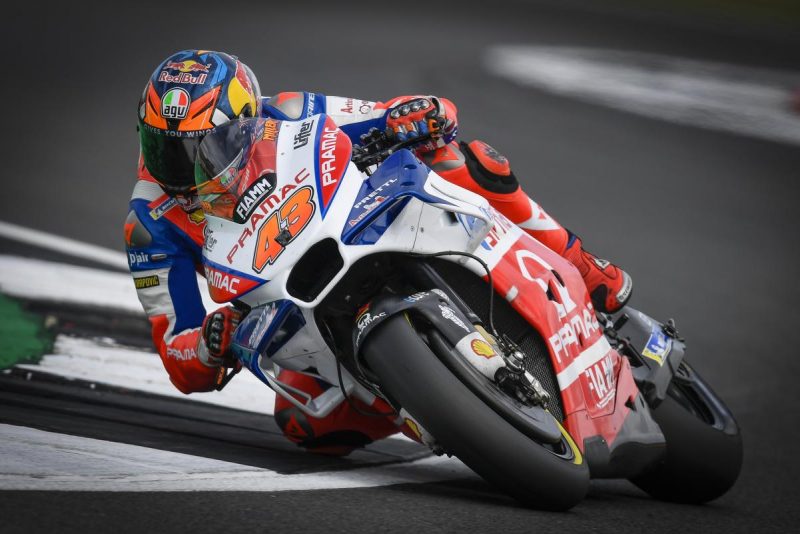 Jack Miller believes that his switch to slicks would have yielded a pole position at the British MotoGP if he had ‘one more lap’ in qualifying.

The Australian was the only rider to move away from wets during qualifying on a Silverstone circuit which was drying after an earlier downpour in Free Practice 4 and then intermittent showers.

He skated off the race track at his first attempt at a flyer after the change but threatened to snatch pole at the start of his next lap.

Miller did a first sector of 24.854s, half a second faster than the next-best split for Cal Crutchlow and nearly six tenths up on that of the pole lap of Jorge Lorenzo.

However, he dumped more than three seconds in Sector 2 and improved only enough to qualify ninth on the grid.

In a sign of what might have been, the Pramac Ducati rider was also more than eight tenths faster than anyone in the final sector, and his ‘ideal’ lap time (sum of fastest sectors across the session) was more than a second faster than Lorenzo’s, which was second-quickest.

With conditions improving, Miller was adamant that he would have taken pole had the session run just a little longer.

“One more lap and I would have had the pole position, I guarantee. 900 percent,” claimed the 23-year-old.

“Even on my best lap, sector three my partial (time) was my best but was quite bad.

“The tyre was still wet on the left side and as I changed directions from the right to the left from (Turn) 11 to 12 (Abbey, Farm), front end went.

“I had to close the gas and sort of stab the knee and pick it up and lost a lot of time there because of that.”

A pole would have been something of a repeat of Argentina in April, when Miller was then the only rider to attempt a flyer on slicks in qualifying.

He suggested that none of the other riders were brave enough to try dry weather tyres.

“They never do, they are all scared,” Miller said when asked if he was surprised he was alone in taking slicks.

Miller had confessed that he was in a form slump in the last few races, but was buoyed by his weekend to date having finished top six in all four practice sessions.

“We’ve been strong all weekend but really happy with the performance this weekend, really turned things around,” he said.

“Hard to say what’s caused it; I think it’s my mindset more than anything else, just in the right place.

“I wish I could tell you, and I’d do it every weekend.”