Mercedes-AMG Team GruppeM Racing claimed a dominant victory in the Suzuka 10 Hours as the German manufacturer took over the Intercontinental GT Challenge championship lead from Audi.

Australian Nick Foster claimed pole position on Saturday for the Taiwanese squad, leading the opening hour, before copping a drive-through penalty for having team members on the grid after the formation lap had started.

HubAuto Corsa’s woes gave the GruppeM Mercedes a clear road up front, with the latter comfortably stretching its advantage and maintaining control right through until the chequered flag under the cover of darkness.

Christopher Hasse closed in on Williamson in the final minutes, but the Audi had to settle for third along with Absolute Racing co-drivers Markus Winkelhock and Kelvin van der Linde.

Sixth was the best of the Bentley Continental GT3s in the form of the #08 M-Sport entry. 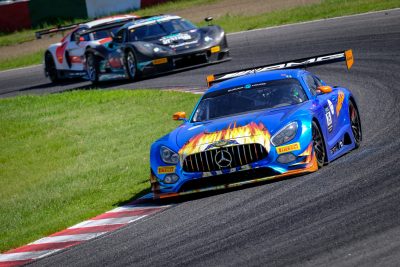 The race saw only a single Safety Car intervention over its 10 hour duration, which came in Hour 3 following a heavy crash for Come Ledogar.

Ledogar, at the wheel of the sole McLaren 650s GT3, made contact with one of the Bentleys on the run to 130R, with the former spearing backwards into the wall and coming to rest in the gravel with considerable damage.

Nissan’s hopes of victory were dashed in the fourth hour, with the #018 KCMG GT-R NISMO GT3 suffering a fuel pressure problem, before ultimately retiring in Hour 6 after momentarily returning to the track.

Foster recovered to 13th at the flag in the pole-sitting Ferrari, while HubAuto Corsa’s sister #27 car finished outside the top 20 after sustaining damage due to an incident with the #07 Bentley in Hour 7.

Hot conditions plagued the race, with temperatures in excess of 35 degrees making it tough for drivers in the cockpit, before things cooled down in the final two hours during the night segment.

Mercedes now lead the IGTC manufacturer standings, while Marciello and Vautier take over the drivers’ points standings heading into the season-ending California 8 Hours at WeatherTech Raceway Laguna Seca in October.