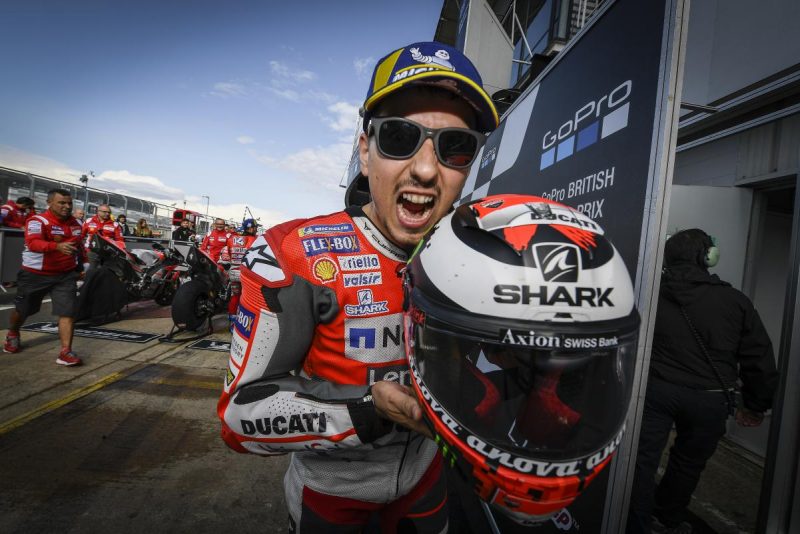 Jorge Lorenzo has secured pole position for the British MotoGP after a qualifying session which was run on a drying Silverstone Circuit.

The Spaniard led Andrea Dovizioso to a Ducati team one-two while Johann Zarco also put his Tech3 Yamaha on the front row.

Qualifying was delayed due to a nasty incident for Tito Rabat at the end of Free Practice 4, when the Spaniard was struck by Franco Morbidelli’s bike having already gone down himself.

The second 15-minute stanza was pushed back further due to an unspecified safety issue, believed to be related to the availability of the helicopter which had been airlifting Rabat to hospital.

When it did get underway, Bradley Smith (Red Bull KTM) was initially fastest with a 2:12.894 having experienced the conditions in Qualifying 1.

Jack Miller (Pramac Ducati) and then Lorenzo moved the mark before Cal Crutchlow (LCR Honda) and Zarco dipped into the 2:11s bracket.

Meanwhile, Miller had become the first (and ultimately only) rider to switch to slicks.

The Australian skated off but remained upright and as Dovizioso and Lorenzo got down to the 2:10s, either side of the chequered flag being unfurled, Miller went fastest to the first sector.

However, his lap blew out to 2.7s slower to the second sector and he ended up ninth.

Zarco’s fastest lap came moments after Crutchlow’s and bumped the LCR Honda rider back to fourth, where he will start alongside Marc Marquez (Repsol Honda) and Danilo Petrucci (Pramac Ducati).

Andrea Iannone (Suzuki Ecstar) and Smith will take up Row 3, next to Miller.

Alex Rins (Suzuki Ecstar) was the other to come through Q1 on his way to 10th, ahead of Movistar Yamaha pair Maverick Viñales and Valentino Rossi.

UPDATED: Race start for the 20-lap grand prix is Sunday night at 2030 AEST.