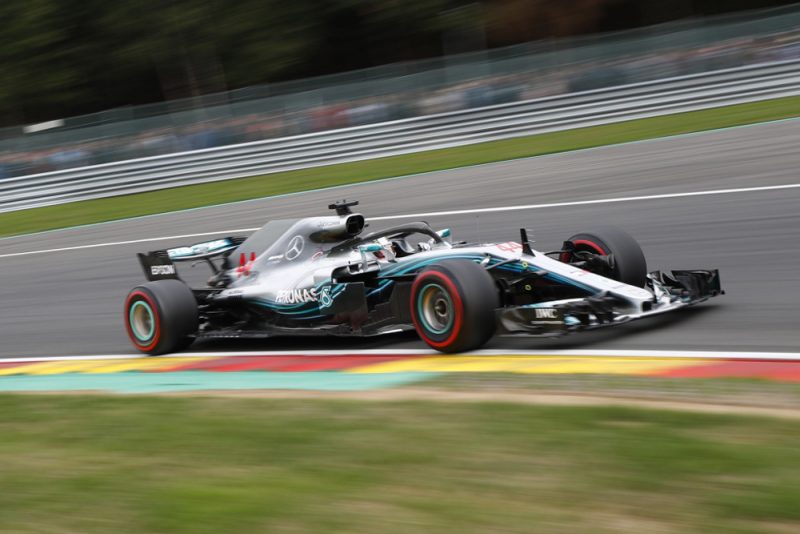 Lewis Hamilton has seized pole position by seven tenths of a second ahead of Sunday’s Belgian Formula 1 Grand Prix at Spa-Francorchamps.

Rain in the final part of the session threw a late spanner in the works, with Hamilton making the most of the conditions to claim his fifth pole at the Ardennes circuit.

Equally impressive however was the performance of Racing Point Force India, which locked out the second row with an incredible performance just days after it looked as though the team would be forced to sit out the event.

Both Esteban Ocon and Sergio Perez were left out on slicks initially, with Perez lucky not to crash out at Eau Rouge, before switching to intermediate tyres a lap later than the rest of the field.

Despite the late change, Ocon recorded his best career qualifying result with third, one place up on Perez.

Red Bull opted for a low downforce set-up in an effort to counter its lack of straight line speed, but paid heavily for the gamble as the rain consigned Max Verstappen and Daniel Ricciardo to seventh and eighth respectively.

Valtteri Bottas chose not to set a time at all in the final part of qualifying, since an engine change will see him drop to the rear of the grid regardless.

It was the same approach Renault employed for Nico Hulkenberg in Qualifying 2, leaving Renault 15th and 16th on the grid after Carlos Sainz was a high profile victim in Qualifying 1.

Sauber drivers Marcus Ericsson and Charles Leclerc escaped the first cull, unlike both Williams and McLarens, which found themselves rooted to the back two rows of the grid.

For Hamilton, the result marked his 78th career F1 pole, and fifth at Spa-Francorchamps which is a new record in itself.

The Belgian Grand Prix is scheduled to being at 2310 AEST on Sunday.