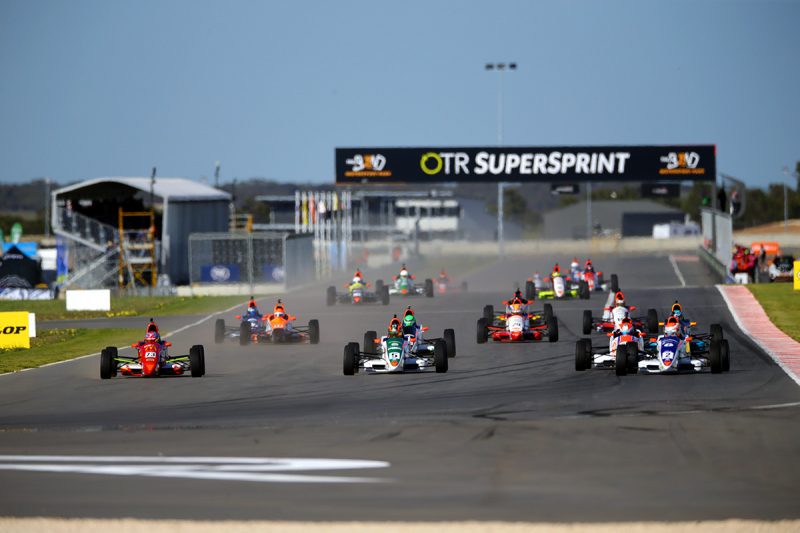 Penalties have been meted out to four Formula Ford drivers for on track incidents during Friday and Saturday at the OTR SuperSprint.

The most high profile of those penalised was championship leader Hunter McElrea, who copped a 15 series point penalty for passing under red flags, with a further 15 point penalty suspended.

The incident occurred at the end of Practice 2 on Friday, McElrea passing the stricken car of Ben D’Alia before passing two cars on track as he returned to the pits.

Three other drivers picked up penalties for infringements during Saturday’s opening race of the weekend, a race which was won by McElrea.

Courtney Prince and Angelo Mouzouris picked up penalties after they tangled in the closing stages of the seven lap race.

Prince had qualified a solid sixth while a charging Mouzouris had climbed his way from the back of the 24-car grid following a mechanical problem during qualifying.

Mouzouris was handed a 15 series point penalty for a dangerous re-entry, while Prince was excluded from the race meeting and docked 60 series points for her involvement by CAMS Stewards.

It’s the second successive event where Prince has been excluded, and as such also received a $5,000 fine which had been suspended following an incident at Sandown.

The final driver to be penalised was Liam McLellan, who was given a two-place penalty in the results after he tagged Nathan Herne.

“Yesterday and Friday we had some incidents that were looked into by our DSO and the Stewards,” category manager Iccy Harrington told Speedcafe.com.

“It’s disappointing for us and those involved that there had to be penalties applied however it’s not the first time we’ve seen these things happen.

“It’s just the unfortunate side of what happens in development categories.”

The penalties came after an entertaining race that saw Hunter McElrea narrowly beat Cody Donald following a four-way scrap for the lead.

Formula Ford has two further races today to complete the round, at 1130 and 1630 local time.