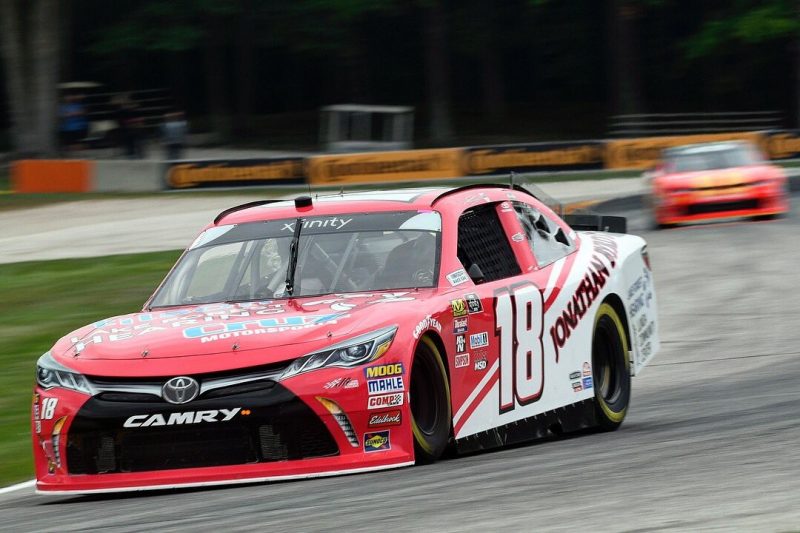 James Davison has finished eighth in the NASCAR Xfinity Series race at Road America having run wide while leading and then been turned around.

Justin Allgaier inherited the lead and ultimately victory in the #7 JR Motorsports Chevrolet, while Davison couldn’t even salvage a runner-up finish after spinning as a result of contact with Justin Marks (#42 Chip Ganassi Racing Chevrolet).

In a one-off start with Joe Gibbs Racing, the Melburnian gridded up third having missed pole for the 45-lap Johnsonville 180 by 0.055s.

He was still running in the top five when his crew opted to strategically bring the #18 Jonathan Byrd’s Hospitality and Restaurant Group Toyota into pit lane before the end of the stage.

While Davison was caught up in contact when the race restarted after a Caution called during his stop, he went on to finish the stage in eighth.

Davison took the Stage 2 restart in fourth position and got up to second before crew chief Eric Phillips again called him into pit lane just before it closed for the end of the stage.

Once others took service in the break between stages, Davison was ninth and Allgaier out in front having opted to not pit.

Brendan Gaughan (#3 Richard Childress Racing Chevrolet) quickly took up the lead and Davison the pursuit in second position, but they went off together on oil on Lap 29.

A Caution was called for the oil, during which Davison pitted and resumed in fifth while Ryan Sieg (#39 RSS Racing Chevrolet) took over the lead and Allgaier second by staying out.

Allgaier passed Sieg on Lap 32 and soon had Davison behind, and they remained as such when another Caution came on Lap 37 as a result of Josh Bilicki (#45 JP Motorsports Toyota) careering off.

Davison passed Allgaier at the restart but slid wide at Turn 7 to hand the lead back almost immediately.

.@JD33Davison powers into the lead on the restart, but a mistake shortly after hands the lead back over to @J_Allgaier.@NBCSN | https://t.co/593lUV9Jw2 pic.twitter.com/8DMY7vhEuW

Worse was to come on the third-last lap when a charging Marks touched the left-rear corner of the #18 Camry at Turn 8 and both went around.

Davison dropped back to eighth and remained in that position until the chequered flag, finishing two positions behind Marks.

Tifft and Hemric rounded out the podium behind Allgaier.