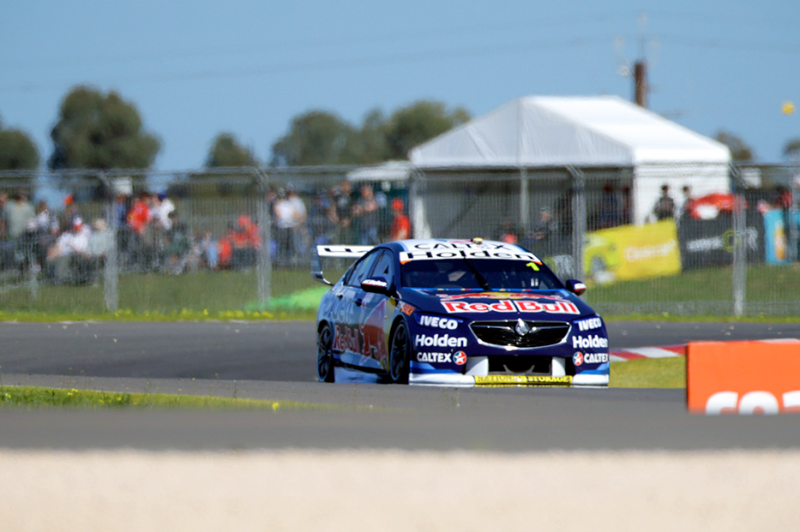 Jamie Whincup has led Shane van Gisbergen to an all-Red Bull Holden Racing Team front row for the second day in succession at the OTR SuperSprint.

Whincup (#1 ZB Commodore) rolled out the fastest lap of the weekend, and therefore the Supercars practice record at The Bend Motorsport Park, when he produced a 1:48.6498s on his first flyer of Armor All Qualifying for Race 23.

Van Gisbergen was second-fastest by 0.6726s at the time in the #97 ZB Commodore and while he improved on his final run, when Whincup did not, the New Zealander still fell 0.4017s short.

“(David) Cauchi (engineer) and the crew made the car better today, and I got the most out of it, plus a little bit of a tow off my team-mate as well which resulted in a 48, so I’m very, very happy.

“I’m a little bit gutted after yesterday,” he added in reference to having to stack in pit lane under Safety Car.

“We worked so hard to get a result and then someone robbed the till halfway through the race and we ended up in P4.

“So (there was) a little bit of anger there, so wanted to come out strong today.”

The 20-minute session ran to something of a template across the 28-car field with all starting on new tyres and most making three single-lap efforts at a quick time.

The top four of Whincup, van Gisbergen, Craig Lowndes, and James Courtney remained unchanged through the second runs, when Scott McLaughlin went to fifth but still 1.0347s off the pace.

Tim Slade jumped from 15th to third on the grid just before the chequered flag and the #14 Freightliner ZB Commodore will start alongside fellow South Australian Scott Pye (#25 Boost Mobile ZB Commodore) on Row 2.

Michael Caruso moved up six positions to fifth with the chequers out and is set to line up alongside Lowndes after the #888 Autobarn ZB Commodore went no quicker than on Lap 1.

McLaughlin will round out the top 10 having gone no faster in his third run in the #17 Shell V-Power FGX Falcon.

“We thought we made some gains, the car felt better, (but I) just didn’t improve over the session so it’s what it is,” said the championship leader.

“We’re 10th and we’ll just have to fight on from there.

“I felt the lap was okay, but I just didn’t get that gain that we probably looked for on a green tyre normally. Bit of head scratching. We’ll look at it and build together as a squad.”

Aside from a seemingly smaller number of spins and other off-track excursions, there was a notable incident between Garth Tander and Richie Stanaway in the final five minutes.

Stanaway appeared to nudge the #33 Wilson Security ZB Commodore through Turn 9/Turn 10 and Tander looked to move towards the #56 Rabble.Club FGX Falcon further around the circuit.

Tander will start 18th and Stanaway, in the fourth Tickford Ford, 27th.