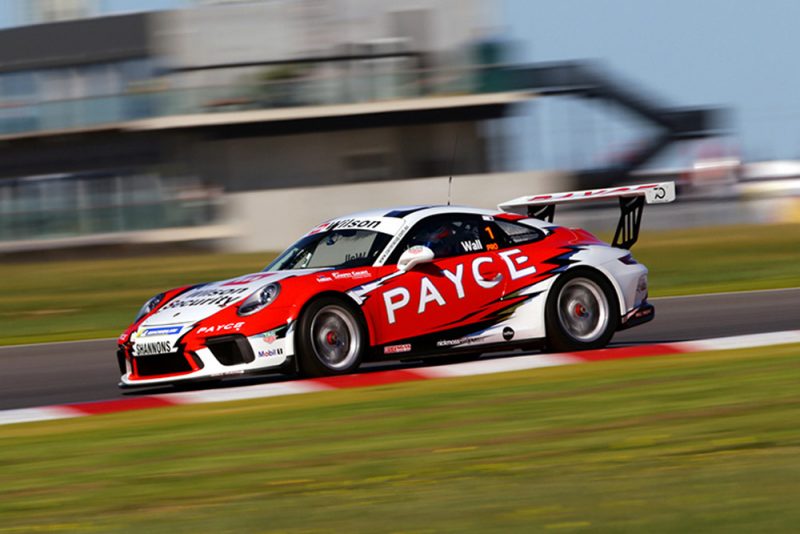 Last year’s champ emerged victorious after a nail-biting battle that saw the lead change hands on multiple occasions, with five cars vying for top spot for much of the 20-lap affair.

Michael Almond was second, having led the race into the final laps, ahead of Dale Wood who had also enjoyed a spell at the front.

Pole-sitter James Moffat stalled on the grid, and was lucky not to be collected by the pack as it streamed off the line.

It handed Wall an unobstructed run into the opening corner, taking the lead from Almond, Wood, and Jaxon Evans.

McBride’s race was quickly over, contact at the Turn 6 hairpin on the opening lap leaving him stranded in the gravel trap while Adrian Flack was also caught up in the clash.

Flack lost control on the approach to the corner, sliding across the grass before making contact with McBride as he turned towards the apex.

The safety car was immediately scrambled, Almond taking the lead through the first complex of corners at the restart.

Wall was then shuffled further back when Wood found a way through, Evans too putting a move on the former race leader.

Almond’s time out front was short, with Wood quickly taking the spot and opening a small advantage as Evans began harrying the second placed Sonic racer.

Wood though wasn’t able to shake his pursuers as the leading battle expanded to a five car scrap as Jordan Love latched onto the rear of fourth-placed Wall.

Evans then slipped out of the lead battle when he found himself shuffled wide by Wall, dropping him to fifth behind Love.

At the front, Almond found a way back through on Wood, who was then forced to defend from the charging Wall, the pair running side by side through the high-speed Turn 5.

It split the leading battle up while Love became a cork in the bottle, heading a train that included Evans, Dylan O’Keeffe, and Peter Major.

With five laps remaining Evans slipped through to climb back to fourth, closing on Wood for third by the flag but unable to find a way through, Love trailing them to the flag fifth.

Having sat 16th after his fluffed start, Moffat charged back through the field to reach ninth at the finish.

Carrera Cup has an eight lap encounter on Sunday morning, at 0945, ahead of a final eight lap race later in the day to round out the event.

Next Story GALLERY: Saturday at The Bend