JOHANSSON: Thoughts on the silly season

JOHANSSON: Thoughts on the silly season 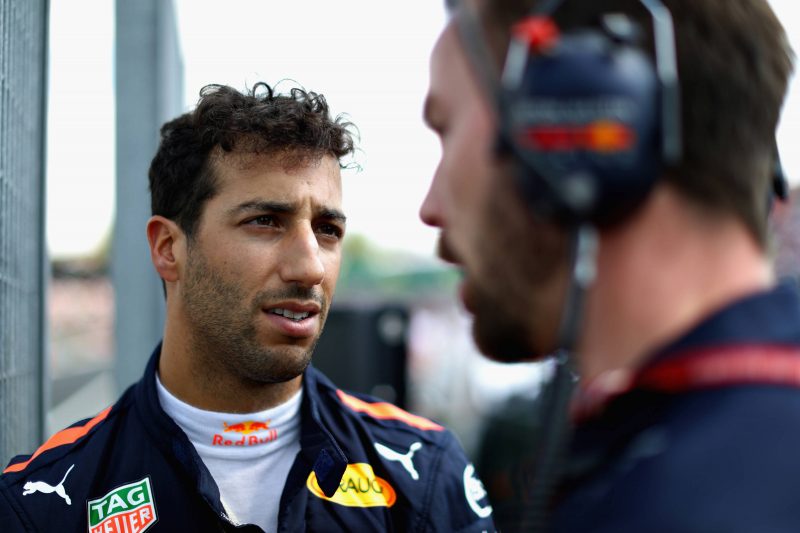 JAN TEGLER: It’s been a few months since the last #SJblog. Since then, the IndyCar, Formula 1 and sports car racing calendars have marched forward. We find ourselves in the middle of the summer break for many series and of course that means it’s silly season for drivers and teams figuring out who will be driving where in 2019.

Formula 1 has made the most news recently with driver shuffles kicking off in early August when Daniel Ricciardo made the surprise announcement that he was leaving Red Bull Racing after four seasons with the team. What do you make of Ricciardo’s move?

STEFAN JOHANSSON: It’s interesting, I don’t think too many people saw that one coming. I’m sure there’s a lot more to it than meets the eye behind his decision to move obviously. Whatever the reason, it’s a major loss for Red Bull.

If you look at it historically, Renault has always won eventually when they’ve been involved in Formula 1. Of course, there’s completely different people at Renault now compared to the past but the commitment is there it seems. Just the fact that they’ve hired Ricciardo tells you the commitment is there. They’ve certainly got some good people in the team and I’m sure they will keep adding more.

I am sure they must have, given Ricciardo’s pretty firm guarantees that they are prepared to allocate the budget and resources required to win the championship. I see no reason why they would not fight with Mercedes and Ferrari eventually.

This situation is different but it’s not entirely dissimilar to when Lewis Hamilton left McLaren, which was then a winning team, for Mercedes who weren’t winning anything at the time. I’m sure he was shown the big plan and the commitment they had to winning the Championship.

Interestingly, Mercedes also had this driver called Rosberg, that no one was completely sure how good he really was and it ended up being a few of years with epic battles between the two. Renault has Hulkenberg that has shown great promise and great speed but never delivered the results; now he will be paired against a proven race winner, will he be able to step up and finally deliver on the promise or will this be the end of his career? I think he will keep Daniel honest and this dynamic could be great for the team if both of them push each other all the time.

I don’t think this is a bad move on Ricciardo’s part; he would have always had to deal with Verstappen being favoured at Red Bull, at least if what we’ve seen until now is anything to go by. Now he’s the team leader, which makes a big difference also psychologically for a driver.

I think there’s a good chance that Renault will eventually be on the pace of the top three; maybe not next year, but if you take a three- or five-year view I feel there is a very good possibility they will. There are always shifts that will come if the rules stay the same for long enough; history shows that everybody will eventually catch up.

The new rules won’t be wholesale like it was when the new engine formula came in to play, where everyone’s been playing catch-up to Mercedes until this year. Even when you dominate or win, like Mercedes, every year it gets a little bit harder to stay on top. So I think at some point it’s likely that Mercedes will end up with a car that isn’t the best and the dynamic will change. Ferrari is already as quick or quicker in many places.

It may take longer because a lot of things are different in F1 now. One is the massive amount of resources required to be competitive. That’s the main reason why Mercedes and Ferrari are at the front. They’re simply spending more than anyone else. I can only assume that Ricciardo has been given pretty strong guarantees about the depth of Renault’s effort.

At the same time, I also think Red Bull will be very strong with Honda power in the next five years. I think Honda is on the verge of cracking it, and when they do they are normally unstoppable.

I think the next few years could become very interesting with both Renault and Honda catching up to Mercedes and Ferrari; it has a good chance of being more competitive than we’ve seen in a long time. I just hope they won’t tinker too much with the rules as we’re now on the verge of everyone catching up, which will allow the competition to be much closer.

But we should never count on the wisdom of the rule-makers; they seem to be experts at making changes where none are needed.

We all know the current set of rules are far from ideal, but at least we have gotten close to the point of diminishing return on R&D and when that happens the racing is always getting better and closer as the gap from the front to the back keeps getting smaller each year. Let’s hope it will stay this way for a while until everyone has figured out  the bigger picture of what really needs to be done. 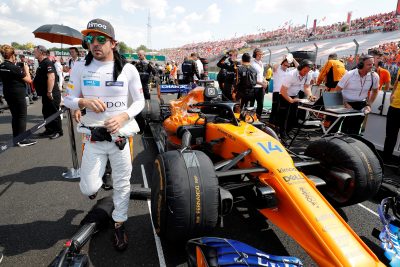 JT: Less than two weeks after Ricciardo’s announcement, Fernando Alonso announced that he would be retiring from F1 for 2019. In comments on his departure Alonso indicated he could still return to F1 if a good opportunity arose and if the series changed enough to produce a good competitive environment.

Alonso added that racing in F1 is no longer enjoyable on track, stating that the predictability of the racing was far too high with little chance to actually compete. He concluded that most of what is talked about in F1 focuses on off-track polemics and politics, not actual racing. What do you think of his decision to leave the series and the reasons behind it?

SJ: I can certainly sympathise with a driver of Alonso’s pedigree, everybody knows he doesn’t belong where he’s at, but that’s the nature of the beast in F1. It doesn’t matter how good the driver is, if you don’t have the best car you will never win or get close to the front. It’s tough to be motivated when you know before the season’s starts that you’re going to be somewhere around eighth to 12th in qualifying and get the odd point here or there.

There’s also this current obsession in Formula 1 with young, fast teenage drivers or drivers around 20 years old. For sure they’re very quick, there’s no doubt about their speed, but we don’t really know how good they are. F1 has turned into a place where driving fast is just about the only criteria that seems to matter. You can see it very clearly in the races. On Lap 1 and Lap 2 there’s more contact and debris flying off the cars – broken wing-endplates and stuff – than there is at the Formula Ford Festival at Brands Hatch every year.

There’s very little racecraft and very few of the drivers who have any racecraft. Alonso is obviously one of them, one of maybe five or six. The rest, even some of the experienced guys, I won’t mention any names, but it’s pretty obvious by now, just should not have the amount of unnecessary accidents they do.

As I’ve been speculating, maybe it’s something to do with these new super long wheelbase cars but it strikes me as very strange that these drivers who are supposed to be the best in the world can’t get past the first two laps without three or four cars per race getting damage in pretty much every single race.

I think one of the problems with F1 is that it’s simply too good. What I mean by that is everything is so well done from the engineering to the simulation of the races that there is literally nothing left to chance, there is no unpredictability left, except if there’s a sudden shift in weather conditions or something else that could not be planned for before the race started. We normally get two to three races a year like that and everybody is jumping up and down over what a great race we just had. That should tell everybody something right there. But unfortunately, it’s the engineers that are running the show now as far as the technical rules go, and they won’t back down, it’s just more and more of the same. No one’s willing to give up their toys. 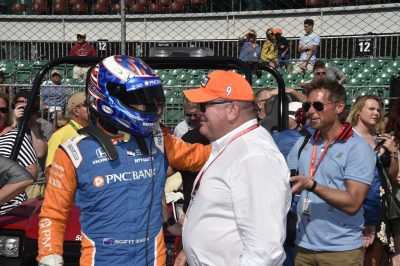 JT: In IndyCar news, Scott Dixon resigned with Chip Ganassi Racing. Scott has driven for Chip since 2002, scoring 43 of his 44 IndyCar victories with the team. He seems very content with the decision to stay at Ganassi despite offers from others including Andretti Autosport and the team McLaren may be forming. As his manager, you played a role in the negotiations. Obviously some work was involved despite the fact Scott elected not to change teams.

SJ: Yes, there was a lot of talk and a lot rumours; I don’t know where some of these guys get their stories from but it was very amusing to hear some of it. So far from the truth that you have to wonder where the rumours started.

Scott certainly had some strong offers but continuing with Ganassi made sense. You know Chip will always put a winning car on the grid, and that is in the end all that matters, the rest kind of falls into place. There’s obviously a huge amount of respect between the two of them and the great success story will hopefully continue for a while longer.

And yes, there was a lot of work associated with it and it was quite stressful at times but as a manager you’re there to try and be objective and look at the bigger picture – all the different factors that come into play and I believe Scott made the right decision in the end.