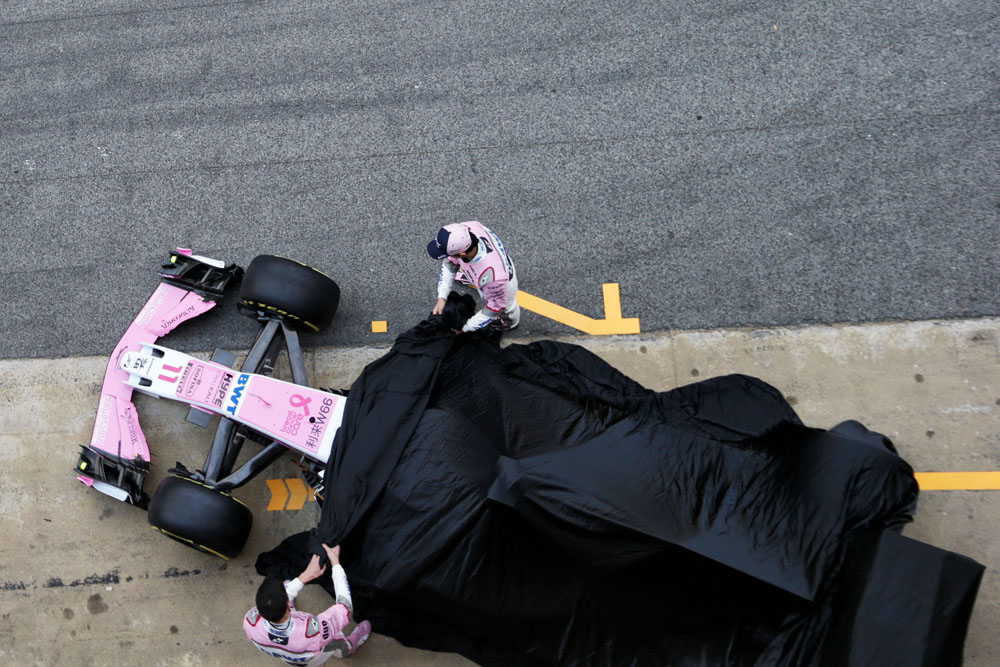 Force India’s participation in this weekend’s Belgian Formula 1 Grand Prix has been drawn into question after uncertainties linger over the team’s precarious financial position.

The beleaguered squad was placed in Administration ahead of the Hungarian Grand Prix, before reportedly being purchased by a consortium led by billionaire Lawrence Stroll.

However, reports now suggest the sale of the team failed to complete as reported, and that the Stroll-led consortium instead only purchased the team’s assets.

The sale itself failed owing to a lien, or right to property in lieu of an unsettled debt, to drinks company Diageo, and a number of Indian banks who also failed to give their approval for to the sale.

Instead it’s now suggested the assets were purchased by the Stroll consortium, leaving the team with only its entry into the Formula 1 World Championship.

Meanwhile the new owners possess the cars, spares, facilities and staff, but no entry into the Championship.

Despite the uncertainties, Sergio Perez remains optimistic that the team he helped place into Administration will take part in the weekend.

“As far as I’m concerned, no. So it’s business as usual,” Perez responded when asked about the prospect of not running this weekend.

“I think the team is quite optimistic, quite happy, we can see a release on the upgrades coming for the future, we see a different structure, and financially the team has a much more stable future for the coming years,” he added regarding the changes he’s seen since the Hungarian Grand Prix.

“So I think that can directly be linked to track performance.

“I was at the factory in the week, and the people I was seeing, there was a lot of enthusiasm, a lot of positiveness going forwards, so definitely a good sign.”

In the Spa-Francorchamps paddock the team’s motorhomes and trucks have been stripped of the team’s branding and advertisers while reports out of Germany’s Auto Motor und Sport suggest a radical resolution has been tabled to teams.

In an effort to transfer Force India’s prize money entitlements to the new entity it has been claimed that F1’s commercial owners have proposed stripping its current world championship points.

The new team would then have the remainder of the season to climb as high up the constructors’ championship table to receive the prize money entitlements under the sport’s complicated two-column prize structure.

All teams would need to approve the plan, with reports suggesting only two of the nine have thus far agreed.

Previously, McLaren, Williams, and Renault baulked at agreeing to allowing Force India to maintain its prize money, a point which all teams must agree on when a team is sold.

It makes for an unprecedented situation that, unless resolved on Thursday in Belgium, could see the team formerly known as Force India miss the event.

Stroll’s place at Williams would be filled by Robert Kubica, while the ousted Esteban Ocon would head to McLaren in place of Stoffel Vandoorne, where he’d reportedly remain for 2019.

It has also been revealed Force India’s deputy team principal, Bob Fernley, has left the team.

Opening practice for the Belgian Grand Prix begins at 1900 AEST on Friday evening.