Dixon ‘trying to reduce the hurt’ caused by Rossi

Dixon ‘trying to reduce the hurt’ caused by Rossi 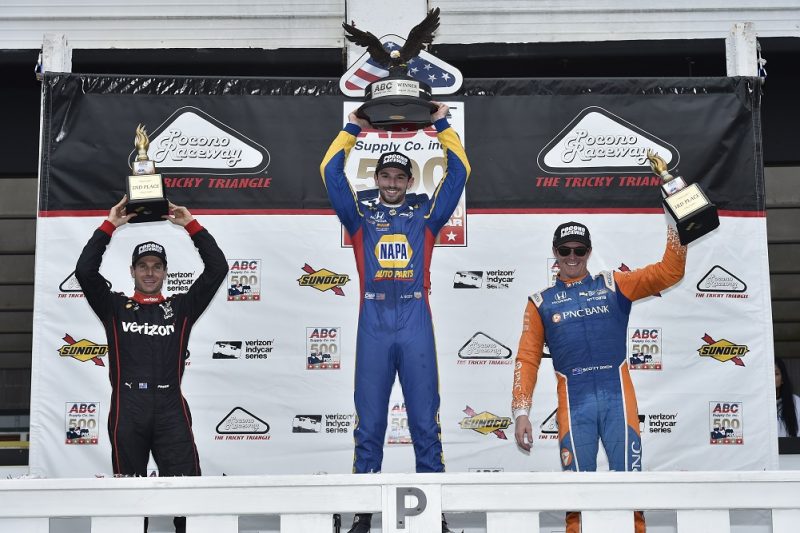 Scott Dixon is wary of the threat to his hopes of a fifth Verizon IndyCar Series title caused by the in-form Alexander Rossi.

The New Zealander continues to lead the series but has seen Rossi win the last two races, on the Mid-Ohio Sports Car Course and Pocono’s ‘tricky triangle’.

Rossi ended up slightly off-sequence during the former as he managed to pull off a two-stopper when no one else could but still led 66 of 90 laps.

At Pocono on the weekend, the Andretti Autosport pilot ran at the front for 180 out of 200 laps but even that statistic sold short his dominance.

Dixon finished fifth from ninth on the grid at Mid-Ohio and climbed to third after starting 13th at Pocono.

Having won the preceding race in Toronto, the Chip Ganassi Racing driver led the series by 62 points, with Rossi a further eight behind.

Rossi moved to second in the standings at Mid-Ohio and now trails Dixon by 29 points, with 209 points on offer for the remaining three races of the season including the double points finale (ie win, pole, and most laps led at each race).

“His team-mates are struggling a bit, but he’s definitely a step above. Can’t take anything away from that, but we’ll just have to see.

“We’re trying to reduce the hurt as much as possible, but I think if you look at the last two races, (the points lead) has almost been halved.”

Dixon has finished higher than he started in 11 of the 14 races to date, including at Pocono when he pitted during the Caution period between the stoppage for Wickens’ crash and the subsequent restart having driven through debris.

He was still left frustrated to have missed out on the potential for an even better finish after being held up behind Marco Andretti, who repeatedly pitted earlier than most to try and gain/maintain track position, during the middle third of the race.

“We got stuck behind Marco,” lamented Dixon.

“It was just miserable. No fault of his, they were just trying to hit a fuel number, but I just couldn’t do anything.

“I think we did the best we could with what we had (but) I don’t think our car was very good.”

This weekend sees the series move to the 1.25mi (2.01km) oval of Gateway Motorsports Park, with qualifying starting on Saturday morning at 0715 AEST.