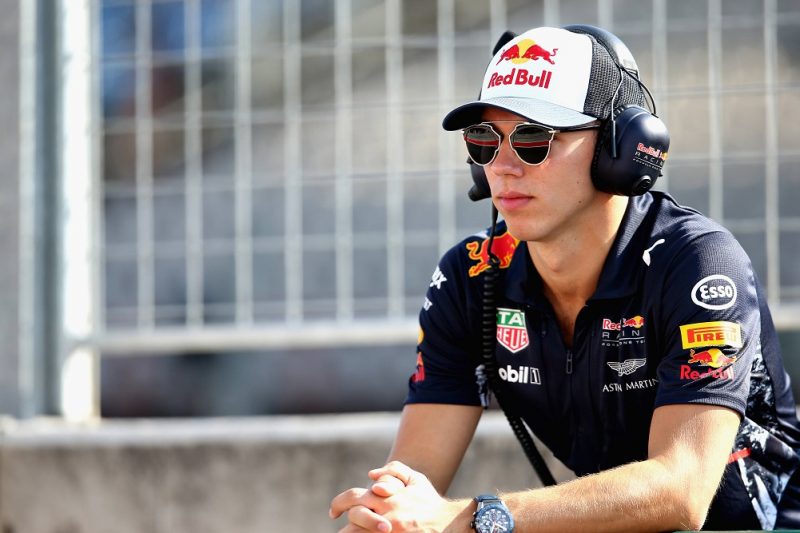 The Frenchman will next year fill the seat vacated as a result of Daniel Ricciardo’s shock move to Renault, alongside Max Verstappen.

Having driven his first season as a Red Bull Junior in 2014, Gasly was called up to Toro Rosso in the back end of 2017 as a replacement for Daniil Kvyat.

“Since Pierre first stepped into a Formula One seat with Scuderia Toro Rosso less than a year ago he has proved the undoubted talent that Red Bull has nurtured since his early career,” said Red Bull Racing team boss Christian Horner.

“His stellar performances this year at the Honda-powered team, in only his first full season in Formula One, have only enhanced his reputation as one of the most exciting young drivers in motorsport and we look forward to Pierre bringing his speed, skill and attitude to the team in 2019.”

Gasly becomes the latest driver to rise through the energy drink’s motorsport ranks, like Ricciardo and future team-mate Verstappen.

“To be awarded a drive at Aston Martin Red Bull Racing from 2019 is a dream come true for me, I’m so excited to be joining this top team,” said the 22-year-old.

“It has been my goal to race for this team since I joined the Red Bull Junior Driver Programme in 2013, and this incredible opportunity is another step forward in my ambition to win Grands Prix and compete for World Championships.

“As hugely exciting a moment as this is, I am fully aware of the challenge this special opportunity offers me and the expectations that faces any driver at Aston Martin Red Bull Racing.

“I wish to thank Franz Tost (team boss) and everyone at Toro Rosso and the factory in Faenza for giving me the golden opportunity of a drive in Formula One and their amazing commitment and support, which I know will continue for the rest of this season. My focus now is to do everything I can to give them a season to celebrate.”

Gasly is currently 13th in the championship with 26 of Toro Rosso’s 28 points, the highlight of his season being a fourth position finish in Bahrain.

He won the GP2 Series in 2016 and was runer-up in last year’s Super Formula series.

F1 returns from its summer break this weekend (August 24-26) at Spa-Francorchamps.