After claiming a dominant one-two finish, both of the Toyotas have been excluded from the 6H Silverstone pic: PSP Images

UPDATE: Toyota has decided to not appeal either exclusion.

Both Toyotas TS050 Hybrids have been disqualified from the FIA World Endurance Championship 6 Hours of Silverstone in a race that saw Australian Matt Campbell claim GTE-Am honours.

Toyota dominated proceedings at the head of the field, four laps clear of the non-hybrids as Fernando Alonso, Sebastien Buemi and Kazuki Nakajima chalked up their third straight WEC race win in the #8 followed home by the sister car.

During post-race scrutineering, however, both were found to have failed skid block deflection tests, leading to their disqualification.

Toyota claimed the failure was a result of running over newly installed kerbs at Silverstone.

“The design and construction of the part concerned has not changed since its introduction at the beginning of the 2017 season,” said the team in a statement.

“Since then it has successfully passed similar tests, most recently at Spa this season.

“The team is now evaluating its next course of action.”

In a separate statement, the stewards refuted the suggestion, stating the car must be up to the challenge of an endurance race.

“Although there are no reports of the car being involved in any specific incident, the competitor stated that his only explanation for the non-conformity must have been as a result of the car running off-track and sustaining some sort of damage to the internal stays that fix that portion of the car,” the stewards stated.

“The stewards considered this possibility but determined that the design of the car must be able to withstand the normal rigors of a six hours endurance race.”

The ruling means privateer squad Rebellion Racing provisionally inherit a one-two finish, with the #3 of Mathias Beche, Thomas Laurent and Gustavo Menezes landing the victory ahead of the #1 Rebellion.

It marks the first outright victory for a non-hybrid prototype in WEC competition since Spa 2012 and the first-ever for a privateer team. 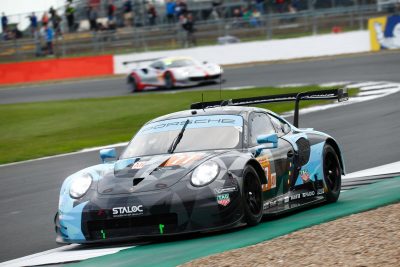 The Porsche trio finished 46 seconds ahead of the TF Sport Aston Martin and Team Project 1 Porsche, who both picked up pit lane penalties, but still managed to finish on the class podium.

Alex Davison claimed fifth in GTE-Am aboard the Gulf Racing Porsche he shares with Ben Barker and Michael Wainwright.

James Calado and Alessandro Pier Guidi picked up the GTE-Pro class win in their #51 AF Corse Ferrari 488, the team’s first since Fuji 2017.

Meanwhile, the #91 Porsche 911 RSR lost its second place finish for a ride height infraction, promoting the #67 Ford GT to the runner up position and the #92 Porsche to third.

Jazeman Jaafar in the #37 car chased down the identical entry driven by Tung in the closing stages, but fell 1.9s short of his team-mate at the flag.

Signatech Alpine’s Nicolas Lapierre, Pierre Thiriet and Andre Negrao rounded out the podium in their Alpine A470 Gibson.

The only safety of the six-hour encounter came at the halfway mark when Davide Rigon’s #71 AF Corse Ferrari left bodywork strewn across the track from a puncture caused by contact with the #17 SMP Racing car.

Earlier in the race, a brief Full Course Yellow was needed for debris as well after Rene Binder spun and crashed the ByKolles Racing LMP1 privateer entry.

The FIA World Endurance Championship continues with the 6 Hours of Fuji and Round 4 of the 2018/19 Super Season from October 12-14.