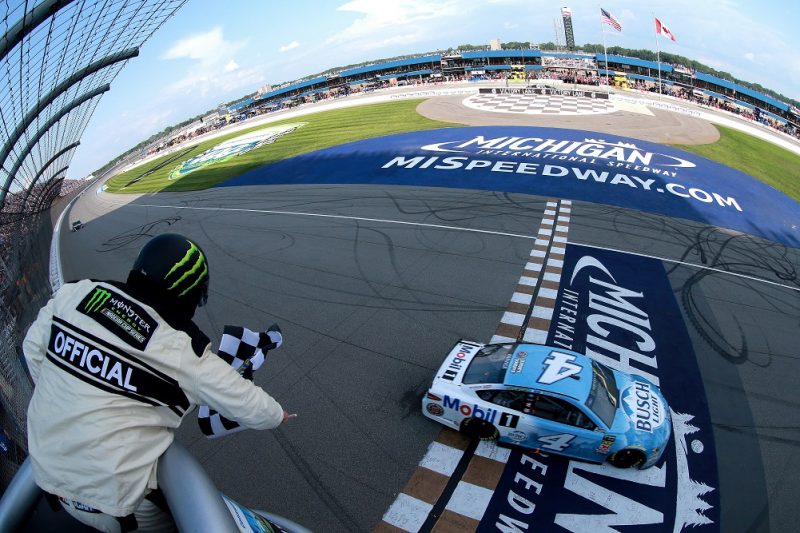 Kevin Harvick has driven into victory lane for a seventh time in 2018 with a sweep of the three stages of the Consumers Energy 400 at Michigan International Speedway.

Harvick did not quite have it all his own way in Stages 1 and 2 but led the entirety of the final stage except for a late green flag pit stops cycle.

The #4 Stewart-Haas Racing Ford was running second to Kyle Busch when the race restarted on Lap 30 after a Competition Caution but Harvick passed the #18 Joe Gibbs Racing Toyota and held top spot for the rest of the 60-lap stage.

Martin Truex Jnr assumed the lead midway through Stage 2 when he and the Furniture Row Racing crew opted to not pit the #78 Toyota under two separate Caution periods.

The 2017 NASCAR Cup Series champion tried to stretch his fuel tank until the green/white chequered flag on Lap 120 but was passed by Harvick 11 laps before then.

Worse still, he had to refill with the pit lane closed for the end of the stage and therefore copped a penalty.

Kyle Busch finished Stage 2 in second position, as he did in Stage 1.

Harvick was first out of the pits for the 80-lap run to the finish, which in fact began on Lap 127, from Kyle Busch and Ryan Blaney.

Blaney made a strong restart, pushing Harvick ahead and slotting in behind the #4 Ford.

He and then Austin Dillon had turns running in second position and it was the latter who resumed that place after the final cycle of pits stops wrapped up with 11 laps remaining.

As Harvick pulled away, Austin Dillon looked like finishing runner-up before his #3 Richard Childress Racing Chevrolet picked up a flat tyre with a lap to go.

Keselowski had moved up to third on a Lap 144 restart and held the same position after the final pit stops before inheriting one due to Austin Dillon’s misfortune.

Blaney (#12 Team Penske Ford) was fourth before those pit stops but emerged in fifth and there he stayed until the chequered flag.

Truex Jnr finished 14th after getting a free pass when Ty Dillon (#13 Germain Racing Chevrolet) ran over debris and smacked the wall on Lap 133.

There were bizarre scenes in the break between Stages 1 and 2 when AJ Allmendinger took his pit stop facing backwards after contact turned his #47 JTG Daugherty Racing Chevrolet around in pit lane.

Contact to @AJDinger as he enters his box! The team just completed their stop backwards. 😳 pic.twitter.com/BH4pPQPjkr

More playoff berths will be up for grabs in this coming weekend’s Bristol Night Race (August 17-18 local time), Round 24 of the year and the third-last of the regular season.