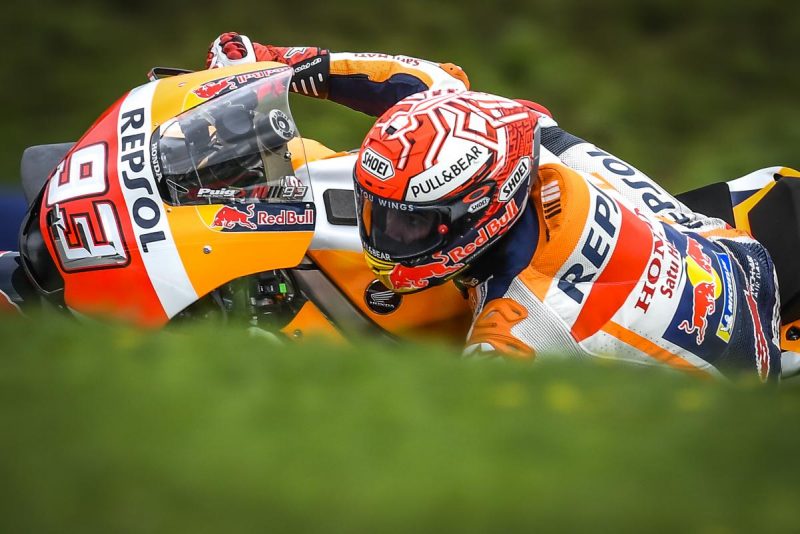 Marc Marquez has qualified on pole for the Austrian MotoGP with a lap 0.002s faster than Andrea Dovizioso’s best as Jorge Lorenzo also made the front row.

Lorenzo briefly interrupted Marquez’s time at the top of Q2 but the Repsol Honda rider was just good enough in the end.

Marquez was fastest after the first timed laps and then at the end of the first runs before Lorenzo, who opted for three runs, went quicker in his middle run.

However, the runaway championship leader would not be denied as he twice improved in his final run to set the ultimate benchmark at 1:23.241s.

The Ducati Team riders were the only two who could take the fight to Marquez and Dovizioso fell agonisingly short in the final minute of qualifying.

Lorenzo got down to a 1:23.376s on his third run before going faster than Marquez to the first sector but ultimately remained third.

“It is a circuit where they (Ducati Team) are very, very strong but anyway I was able to be fast during all the practice (sessions) and this is the most important,” said Marquez.

“(It) Looks like tomorrow will be dry so it is important to concentrate because they have good pace.”

Heading up Row 2 is the Pramac Ducati of Danilo Petrucci, alongside Cal Crutchlow (LCR Honda) and Johann Zarco (Tech3 Yamaha).

Viñales never looked like qualifying in a prominent position and ended up on the middle of the fourth row, between Alex Rins (Suzuki Ecstar) and Alvaro Bautista (Nieto Ducati), both of whom came through Qualifying 1.

Rossi had to go into the first 15 minutes of qualifying, for which the starting order was effectively decided by Free Practice 1 after weather affected the next two practice sessions.

The Italian didn’t make it out and will start 14th.

Jack Miller was seventh-fastest in Q1 after failing to set a time during his first run due to a gearbox issue for his Pramac Ducati.

He will, however, start 16th due to a three-position grid penalty for Franco Morbidelli (Marc VDS Honda) for impeding another rider while riding slowly on the racing line during FP1.

Race start for the 28-lap grand prix is tomorrow night at 2200 AEST.