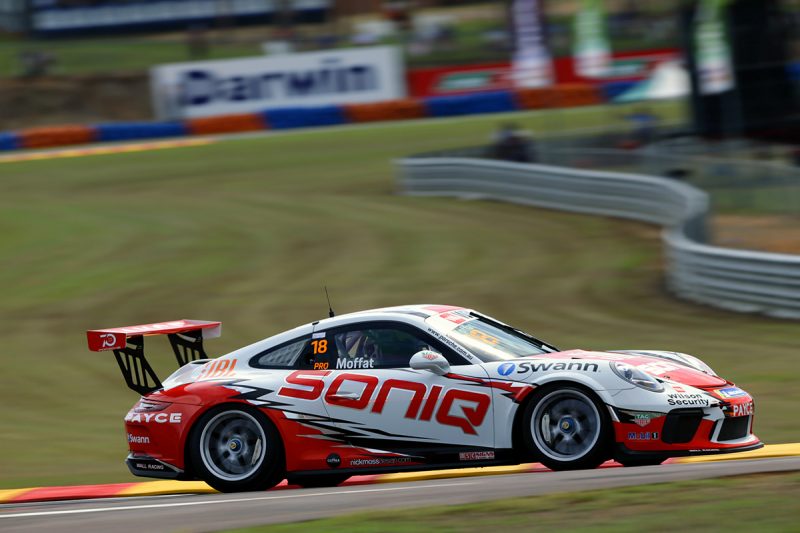 James Moffat believes the prospect of a co-driving role in the Pirtek Enduro Cup is a secondary consideration to his Carrera Cup program.

Having stepped out of a full-time Supercars drive at the end of last season, Moffat was a high-profile addition to the Porsche Wilson Security Carrera Cup Australia series this season.

The former GRM driver though says his Porsche program is now his focus, and while it keeps him in the picture for an endurance drive it’s not the primary motivation.

“That’s probably a secondary thought if you like but I’m doing Carrera cup this year because I enjoy racing and I’ve been fortunate enough to put the deal together to continue to race,” Moffat told Speedcafe.com.

“That’s why I’m out there. I’m not out there to prove to people that I can still drive or anything like that, I just enjoy racing.

“The prospect of not racing anything other than the enduros I wasn’t really comfortable with, so I put everything I could into trying to put together a deal with Wall Racing and with the support of Wilson and Payce and all my other backers, I was able to do it.

“Obviously, I’ve got my endurance drive sorted this year, and I’m excited and looking forward to what Chaz (Mostert) and I might be able to achieve over those three races.

“At the same time, I feel like we’ve got some really good momentum on the Porsche side of things and we’ve got three rounds to go and there’s still plenty to play for.”

After a decade racing Supercars, the last seven of which was spent as a full-time driver in the main game, Moffat took time to adapt to the Porsche.

He claimed his first win of the year in Darwin, a result which came after a steady start to the campaign.

Moffat backed up that performance with another strong showing at Sydney Motorsport Park last weekend.

“We probably just didn’t test enough with the new car at the start of the year,” Moffat said of his slow start to the campaign.

“I was always confident going to Darwin, it’s a place always enjoy driving at. The speed up there was good.

“It was nice to pick up the race win in the longer third race, second overall for the weekend was certainly much better from where we’d been running in the first three rounds of the championship.

“Then between Darwin and Sydney on the weekend we actually had the opportunity to do a couple test days, one at Tailem Bend and then another one at Sydney.

“It was nice just to spend a couple of days in the car and try a few things out,” he added.

“I think the performances, both at Darwin and Sydney, have been much better and what I was, sort of, hoping for when I started the year.

“That’s probably what I can put it down to is having the ability to spend a few days in the car and understand what, particularly, this new generation car wants.”

The different style of racing has also taken time for Moffat to adapt to, but the Supercars race winner feels he’s now come to grips with the shorter format races.

“We’ve been quite strong and competitive in those (longer) races and that’s perhaps just a bit of my experience in coming from Supercar where you’ve got longer style of races and looking after the tyre is something that you have to consider, whereas in the weekend at Sydney, two 16 lap races, you don’t have to worry about the tyres wearing out, it’s just flat out the whole time.

“The biggest thing is understanding the competitors you’re racing against, with the exception of (David) Wally and Dale (Wood) that I’ve competed against more recently in Supercars.

“All the other guys that are up at the front of the field, you don’t really know how they race at times.

“It’s more been adjusting to that and understanding (that) some guys are obviously more aggressive than others.”