Ford has unveiled the Mustang with which its teams will compete in next season’s NASCAR Cup Series in a ceremony at the company’s Dearborn headquarters.

Three-time NASCAR champ turned team-owner Tony Stewart got behind the wheel to provide the public debut of the car which will take over from the Ford Fusion. 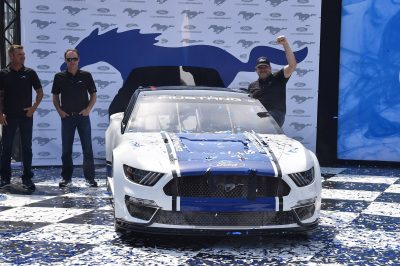 “Ever since we announced in April that Mustang would be going to the Cup level in 2019, we’ve heard nothing but positive feedback,” said Ford’s director of global motorsport Mark Rushbrook.

“Our Ford Performance team has worked hard with the Ford design team to create a Mustang that will be competitive on the track while remaining true to its proud heritage.

“We can’t wait to see it winning races in the NASCAR Cup Series next year.”

The Mustang will join the Chevrolet Camaro on track as Ford looks to end a championship drought which stretches back to 2004.

Ford already competes with the Mustang in NASCAR’s XFinity feeder series, which will next year also see Toyota field the Supra in place of the Camry.

Mustang’s debut in NASCAR’s top flight competition will coincide with its return to Australian competition, with Supercars teams DJR Team Penske and Tickford Racing currently working to homologate the car.

The 2019 NASCAR season begins in Daytona, with the Mustang set to make its first competitive appearance on February 10.