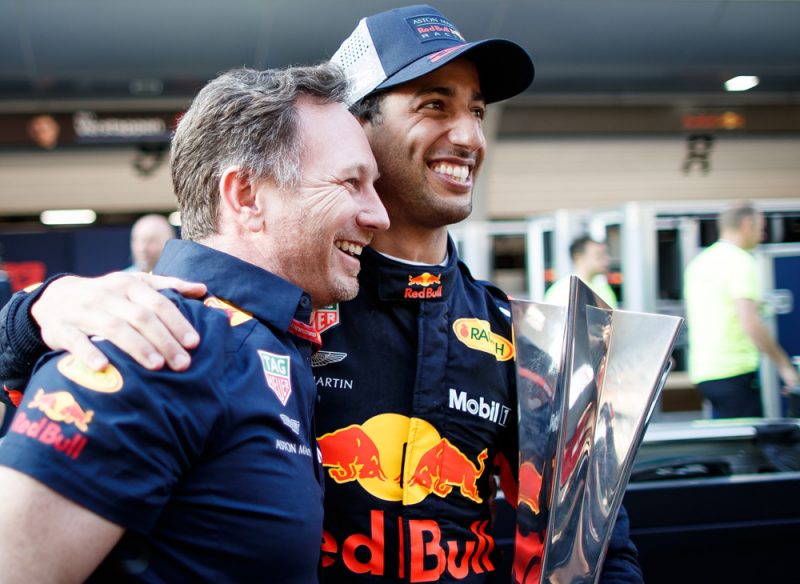 Christian Horner has admitted that he thought Daniel Ricciardo was playing a joke on him when delivering the news that he’d leave the team at the end of the season.

Having been widely expected to remain with Red Bull, Ricciardo shocked the Formula 1 paddock last week when it was confirmed that he’d join Renault for 2019.

It was a move so unexpected that even Horner took a moment to realise the Australian wasn’t joking.

“I thought he was winding me up to be honest with you,” Horner told the Formula 1 podcast.

“He rang me to say I’m going to Renault. I said ‘You what? Is this a wind-up for the summer holidays?’ But it then became very clear that was his choice and you have to respect that.”

Ricciardo has been part of the Red Bull program for a decade, having benefited from the Austrian company’s support through much of his junior career.

However the team’s decision to switch from Renault to Honda power, and the perception that Max Verstappen is the favoured of the two drivers, look to have swayed Ricciardo.

Since then it has continued to invest in the team, which currently sits fourth in the constructors’ championship, one place behind Red Bull.

“I think Daniel decided after a long flight to America, he decided he wanted a change. You look at the rational reasons for that, it’s difficult to understand, but Daniel obviously had his reasons.”

The Red Bull team boss was also quick to claim neither driver received preferential treatment, and revealed the team even offered the Australian a one-year deal in its attempts to keep him.

“I think it comes back to wanting to take on, in his words, a new challenge but I also feel he sees Max growing and growing in terms of speed and strength and he doesn’t want to play a support role I guess, for want of a better word, not that they are treated in any way differently.

“They would have equal status, as they have always had. I could understand if it was to Ferrari or Mercedes, but it’s an enormous risk at this stage of his career.

“It’s been a bit like trying to convince a girl to go out with you, but she’s being pretty reticent. We have bent over backwards to make it happen, but if someone’s heart isn’t really in it, then…

“We gave Daniel everything he wanted and asked for and it still wasn’t enough. We were even prepared to do a one-year agreement so he was available to Ferrari or Mercedes should they come knocking in 12 months’ time.

“It wasn’t about money or status, commitment or duration. I think he felt ‘I need to take something else on in this stage of my career’. It might be an inspired choice, it might one that he regrets.”