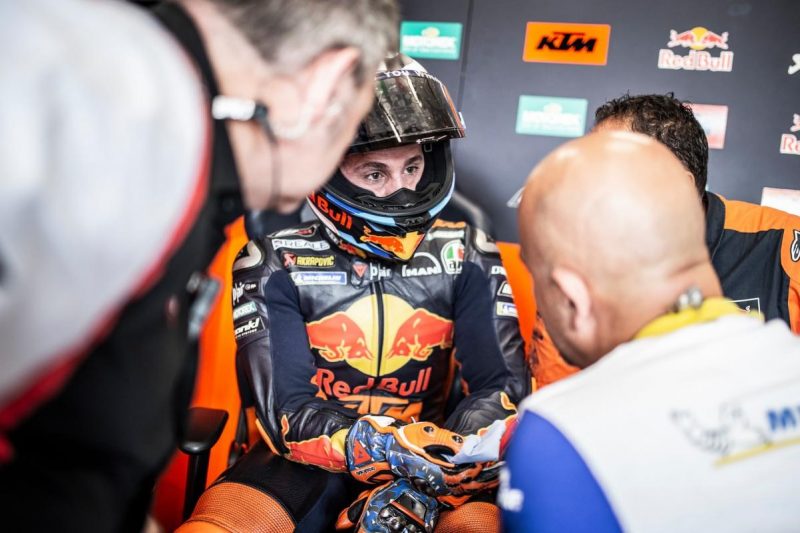 Red Bull KTM rider Pol Espargaro has avoided surgery but will miss this weekend’s Austrian MotoGP due to a fractured collarbone.

The Spaniard went down during the warm up session at last weekend’s Czech MotoGP and was ruled unfit to start the race.

He was hospitalised at the time and has since undergone further examination in Barcelona, where it was found that the damage to his left collarbone is not as bad as feared.

However, Espargaro will still be out of action at the Red Bull Ring.

“Pol was checked in Barcelona on Monday morning and we had the positive news that he wouldn’t need surgery for what is just a crack, rather than a full break to his collarbone,” said KTM Team Manager Mike Leitner.

“There was also no damage to other bones or to his spine.

“He will have another check this week when the swelling has reduced. Pol needs to rest, and we’ll have to keep assessing and controlling his situation as he has a lot of neck pain.

“He’ll stay in hospital until the end of the week so for sure he will not make the Grand Prix at Spielberg.”

Espargaro’s withdrawal means that KTM’s contingent is likely to be reduced from a planned three entries to one in Austria.

Test rider Mika Kallio had been scheduled to make a wildcard start at KTM’s home race but he too crashed heavily in recent times, in practice last month in Germany.

Leitner put the likelihood of Espargaro not being replaced this weekend at “99 percent”, meaning Bradley Smith would be the team’s only rider.

The Austrian MotoGP begins with practice this Friday, before qualifying from 2210 AEST on Saturday and the 28-lap race on Sunday.