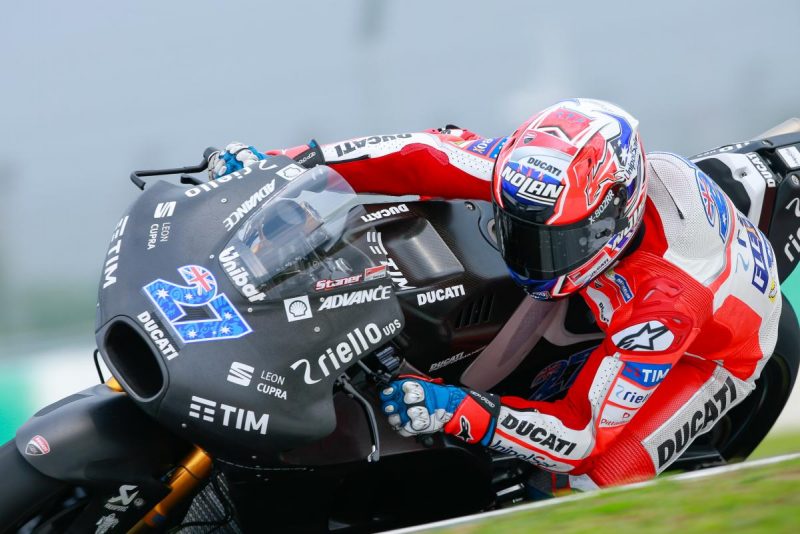 Casey Stoner’s future as a test rider depends largely on his recovery from significant shoulder surgery earlier this year, according to Ducati.

A report that Stoner was set to give up his role as a Ducati test rider emerged over the weekend, and suggested that the reason was the effort required to maintain fitness for a small number of rides per year.

Ducati Corse Sporting Director Paolo Ciabatti has since spoken on the matter, stating that the deliberations in fact relate to the mobility of Stoner’s right arm.

The Australian still does not have full movement after surgery in February related to injuries suffered in a major crash in the 2015 Suzuka 8 Hours when the throttle on the Honda he was riding jammed open.

Ducati is planning to discuss his future with the Borgo Panigale factory again next month.

“The situation is that, when we agreed with Casey to come back to Ducati as a test rider and brand ambassador, we had a two plus one – a three-year deal (including an option) – that is expiring at the end of 2018,” Ciabatti told Dorna MotoGP pit reporter Simon Crafar.

“We met Casey during World Ducati Week at Misano (July 20-22) and we spoke a bit about the future.

“He’s still recovering to the surgery to his shoulder and he still cannot really move his shoulder up more than 90 degrees, so it was quite a comprehensive surgery and he’s still rehabilitating from that.

“So we decided we would touch base again later, in September, and see what the progress is with the shoulder to see whether there are conditions to continue as it is now as a test rider and brand ambassador – or maybe only as an ambassador. We’ll have to see with him.

“I think his main concern now is to recover the use of his shoulder and arm. Once that is done we can talk about the future.”

Stoner remained with Honda as a test rider for three years after retiring from racing at the end of 2012, during which time he also raced for one season in the Dunlop Super2 Series with Triple Eight Race Engineering, before returning to Ducati.

The 32-year-old his not ridden one of its Desmosedici grand prix motorcycles since an unofficial test at Sepang in January prior to undergoing surgery.