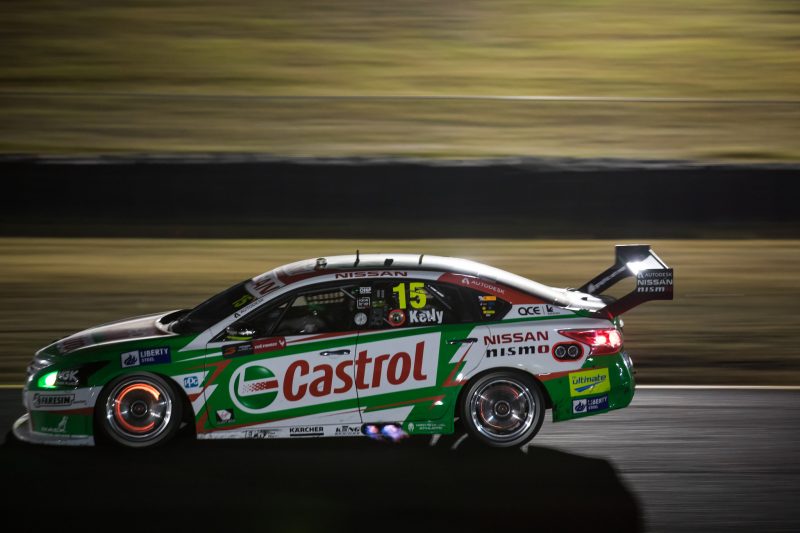 Rick Kelly believes his Nissan Motorsport squad has made ground in unlocking the race pace of his Altima after coming home sixth despite a slow puncture at the Sydney SuperNight 300.

The Braeside squad through Kelly in particular has shown strong one lap pace but has been unable to match the qualifying speed come the races.

Unlocking the secrets to the Altima’s race pace struggles has been a key objective in recent weeks and Kelly feels his run to sixth at Sydney Motorsport Park displayed that progress in the area is being made.

Kelly extended his run of qualifying inside the top 10 to 10 consecutive races by securing an impressive fourth on the grid ahead of Saturday night’s 300km race.

The 2006 series champion dropped to eighth on the opening lap in what was a difficult first stint before a slow puncture in the second further hampered his race.

However, a strong end to his race saw him climb up the order to sixth at the chequered flag.

“Sixth was pretty good for us. One thing we had been working hard on lately was our race pace and I think we achieved that,” said Kelly.

“Even though it’s cold and at night, tyre degradation around this place is still pretty significant.

“So we had a big swing at the race package and the last stint proved we made some good in-roads there.

“Sixth isn’t a great result given our one-lap speed, but we bagged plenty of points.

“The race wasn’t without incident though. We had a slow puncture before our second stop and that probably cost us a position or two at the end.

“But overall, we’ve got to be really happy with the direction we’re heading in.”

Kelly has dropped from seventh to eighth in the standings despite his strong finish under lights in Sydney.

It proved to be a bittersweet night for the Nissan Motorsport squad with Simona De Silvestro scoring her second best result of the year in 14th, while Andre Heimgartner and Michael Caruso limped home after suffering damage in incidents with Garth Tander and Anton De Pasquale respectively.

“We had been struggling with oversteer all weekend and that remained the same in the race,” said De Silvestro.

“But to finish P14 after starting much further down the order is a good achievement.”

The championship heads to South Australia for the inaugural OTR SuperSprint at new The Bend Motorsport Park circuit from August 24-26.