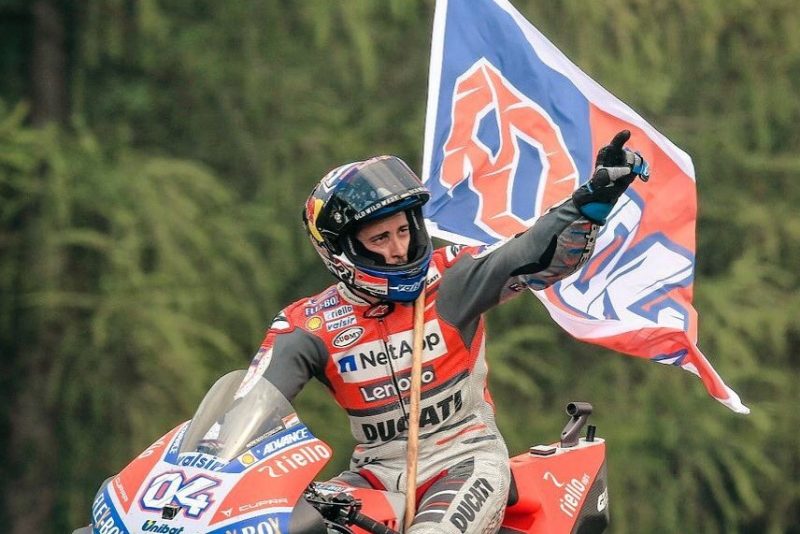 Andrea Dovizioso has come out on top of a Czech MotoGP which went down to a three-way fight between the two factory Ducatis and championship leader Marc Marquez.

Dovizioso led for the vast majority of the 21 laps but that statistic belies the nature of the race, which was cagey for the first half and became a real battle between the aforementioned trio in the latter stages.

While Jorge Lorenzo set the fastest lap on the final lap, he could only split his current and future team-mates on the podium at the Automotodrom Brno.

Valentino Rossi got the holeshot from the middle of the front row but was passed by Dovizioso at the end of Lap 1, while Marquez ran third and Lorenzo fourth.

The latter two went at each other for several laps and Marquez twice reclaimed the place with a criss-cross at Turn 5/Turn 6.

During that time, Rossi passed Dovizioso for the lead at Turn 5 on Lap 8.

However, the complexion of the race changed at the halfway mark when Dovizioso overtook Rossi at Turn 1 and Marquez also moved ahead of the #46 Movistar Yamaha two corners later.

Cal Crutchlow, who had been lurking with Danilo Petrucci (Pramac Ducati) a little further back, had taken fourth from Lorenzo by that time and the manoeuvres at the front helped him to catch Rossi.

The Brit snuck by ‘The Doctor’ at Turn 12 on Lap 12, and Rossi lost the back of the top three before succumbing to Lorenzo on Lap 13.

Even then, the race appeared to be in something of a holding pattern as the front-runners continued to lap notably slower than the predicted Sunday afternoon pace.

Lorenzo caught back up to Crutchlow and rode his Ducati through a big hole left by the LCR Honda rider at Turn 14 with five laps remaining.

He stalked Marquez for a couple more before nearly pulling off a remarkable double-move on Lap 18 when he passed the Repsol Honda through Turn 13 and carried the momentum past Dovizioso at Turn 14.

The latter part of the move, Lorenzo could not pull off, so he tried again at Turn 4 in each of the next two laps.

On both occasions, Dovizioso made a superior exit and kept top spot, and it was second position which would be in dispute on the final lap.

Marquez passed #99 at Turn 3 but Lorenzo put his Ducati back down the inside at Turn 5, nearly taking down the front wheel of the #93 Honda.

Just ahead, Dovizioso grabbed a hard-earned first win since Round 1 in Qatar.

Rossi passed Crutchlow at the very last corner to nab fourth, while Petrucci finished within a second of them in sixth.

Jack Miller (Pramac Ducati) finished 12th from 17th on the grid, making up those five positions in the first six laps.

He moved net zero positions on Lap 9 when Bautista got past but former team-mate Tito Rabat’s Avintia Ducati suffered an apparent mechanical failure just in front.

There was a fast three-bike spill on the opening lap which accounted for Maverick Viñales (Movistar Yamaha) and HRC Honda wildcard Stefan Bradl.

Bradley Smith rode his Red Bull KTM away from the scene but retired soon after anyway, while his team-mate Pol Espargaro didn’t take the start after breaking his left collarbone in a warm up crash.

Scott Redding was the race’s other retirement when he and his Gresini Aprilia went down on Lap 6.

Marquez’s championship lead over Rossi is out to 49 points, a point short of two full races, ahead of Round 11 in Austria next weekend (August 10-12).