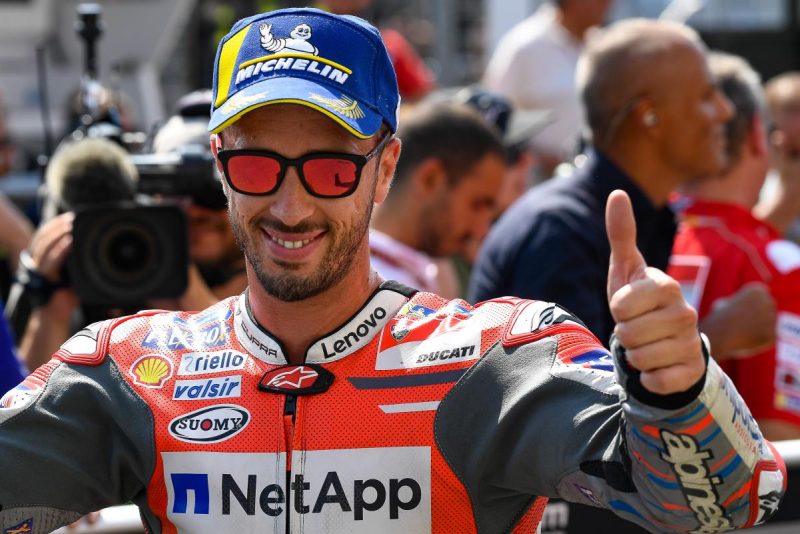 Andrea Dovizioso has qualified on pole for the first time in over a season-and-a-half while Valentino Rossi also made the front row for the Czech MotoGP.

The Ducati Team rider ended Qualifying 2 a healthy 0.267s faster than Rossi, with Marc Marquez knocked back to third by the two Italians.

It was the other factory Ducati rider of Jorge Lorenzo who had started brightest, reeling out the then-fastest lap of the weekend (1:55.059s) on his first flyer.

The Spaniard lowered his own benchmark slightly to 1:55.038s at the start of his second run before Marquez lapped the Automotodrom Brno in 1:54.961s on his Repsol Honda.

When the chequered flag flew, Marquez was still fastest from Lorenzo and Cal Crutchlow, but that was about to change.

The pole is the first for ‘Desmodovi’ since the 2016 Malaysian MotoGP.

Lorenzo ended up fourth and will start alongside Crutchlow (LCR Honda) and Danilo Petrucci (Pramac Ducati).

Row 3 will be Johann Zarco (Tech3 Yamaha) and the Suzuki Ecstar entries of Andrea Iannone and Alex Rins, the latter of whom came through Qualifying 1.

The latter had failed to earn a direct pass to the second stage of qualifying but was comfortably quickest in Q1.

Jack Miller might have emulated the Spaniard in moving through to the final 12, going fastest to the second sector before crashing his Pramac Ducati during his final run.

The Australian will start 17th as a result.

Aleix Espargaro (Gresini Aprilia) was fit enough to take on the race weekend after a sizeable crash in the warm up during the last round in Germany and qualified 24th.