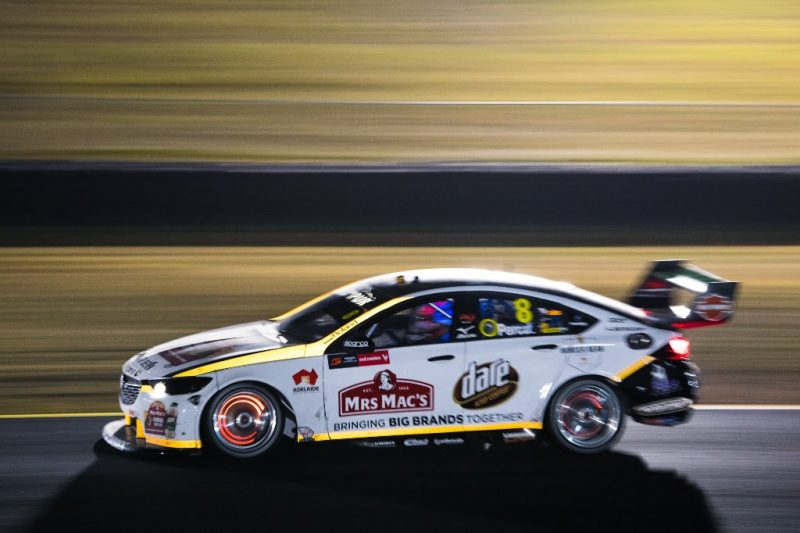 Brad Jones Racing’s Nick Percat and Tim Slade have both expressed their delight at driving into the top 10 from deep in the field in the Red Rooster Sydney SuperNight 300.

Slade was the Albury outfit’s highest qualifier in putting the #14 Freightliner Holden 12th on the grid, nine positions ahead of Percat.

After 77 laps of racing, Percat had moved Car #8 up to eighth position as Slade rounded out the top 10.

The results are even more impressive considering Slade lost four positions after contact with James Golding on Lap 5 and was punted by Cameron Waters on Lap 15.

He ran 25th, virtually last after Andre Heimgartner’s early steering problem, once the first pit stop cycle shook out but was back to 14th for the Lap 61 Safety Car restart.

Slade gained four more positions by the chequered flag, the last of which was a pass on Fabian Coulthard on the final lap.

The 33-year-old had similarly marched forward during the preceding race of the season at Queensland Raceway, a drive which he hoped was a sign of things to come.

“There were a couple of moments where I felt a bit vulnerable and people were throwing a few dive bombs. One of the moves was wheel to wheel and it knocked the steering wheel out of my hand.

“I went off track and lost a couple of spots, then fought to make them back up and was harpooned by Waters at turn two and had to press on as best I could after that.

“The car still felt really good, so it gave me some solid motivation to keep pushing hard. The second stint felt strong and I was hoping the pace would keep up and alongside with our strategy be enough to move us forward towards the end.

“I think the Freightliner Racing Commodore was really competitive throughout the race and has good speed, we just need to keep unlocking some more things in qualifying.”

Percat also fell back to second-last, on the opening lap, and had mixed feelings given that he couldn’t fully exploit the pace which saw him at one stage hold the new Supercars lap record at Sydney Motorsport Park.

“From the starting position, it looks like we made up 13 spots but we ultimately made up more,” he noted.

“I had a good start to the race but got unloaded there a couple of times during the first couple of laps so found myself back in 25th. From then on I was putting everything I had into each and every lap to move back forward.

“The Mrs Mac’s & Dare Iced Coffee Supercar performed really well in the colder conditions, it looked after its tyres well and I feel like we had minimal tyre degradation.

“We know it was fast as we broke the race lap record, and then Jamie Whincup only just beat (the time).

“I passed a lot of cars which is good, but as always you want to start much higher than what we did.

“Even a couple of spots helps out as it could have meant I was in front of (David) Reynolds and (Rick) Kelly (seventh and sixth, respectively) after the (final) stops. I feel like we had pace on them but couldn’t get around them in the latter laps.

“Overall it was mega to get back up to 8th. It was cool to make some big moves in the race, and it was a lot of fun racing under lights in front of a huge Sydney crowd.”

Slade has gained another championship position to sit ninth, while Percat remains 11th.

BJR jumped two positions to fourth in the teams’ championship, in par due to Walkinshaw Andretti United’s drop from third to sixth after twin left-front component failures.